My Son Sanctuary is set in a small valley belonging to Duy Phu Commune, Duy Xuyen District, Quang Nam Province, about 70km southwest of Danang City and 40km from Hoi An City. Of the 225 Cham vestiges that are founded in Viet Nam, My Son possesses 71 monuments and 32 epitaphs, the content of which is still being studied. 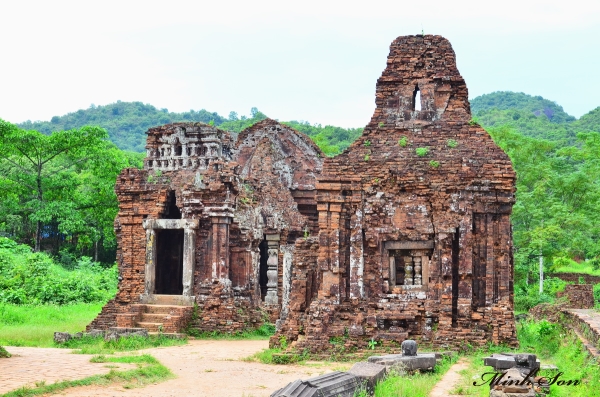 The Cham Kingdom had two sanctuaries belonging to two main opposing clans. My Son of the Dua Clan, ruled over the north of the kingdom and was the place for the worship of God Srisana Bhadresvara. The Cau Clan, who reigned over the south had Po Nagar Sanctuary, dedicated to Goddess Po Nagar. Nevertheless, My Son was considered as the sanctuary of the Cham Kingdom.

The first constructions date back to the 4th century under the reign of Bhadravarman for the worship of God Shiva-Bhadresvara. But later on, the temple was destroyed. At the beginning of the 7th century, King Sambhuvarman had it rebuilt and rebaptized Sambhu-Bhadresvara. Each new monarch came to My Son after his accession to the throne, for the ceremony of purification and to present offerings and erect new monuments, which explains why My Son is the only place where Cham art flourished without interruption from the 7th to the 13th century.

Architecture in My Son

The temples in My Son were built into groups that basically followed the same model. Each group was comprised of a main sanctuary (kalan), surrounded by towers and auxiliary monuments. The kalan, which is a symbol of Meru Mountain (centre of the universe, where the gods live) is dedicated to Shiva. The small temples are devoted to the spirits of the eight compass points. In the towers, topped with tiled, curved roofs, were stocked the offerings and sacred objects of the pilgrims. Cham temples do not have windows, so they are very dark inside. Windows are only found on the towers.

Cham towers and temples are built of bricks associated with sandstone decorations. It is quite noteworthy that no adhesive can be seen in between the bricks, which is amazing since some of the works have survived thousands of years. The structures were built, and only then did the sculptors carve the decorations of floral patterns, human figures or animals. This technique is unique in Asia.

Every kalan in My Son is comprised of three parts: the bhurloka (foundations), the bhurvaloka (body of the tower) and the svarloka (roof).

The bhurloka represents the terrestrial world. It is decorated all the way round by engravings of patterns, animals, human characters praying under small vaults, masks of Kala or Makara (monsters), dancers, musicians…

The bhurvaloka symbolises the spiritual world where, after being purified, men could meet the ancestors and the gods. It is built with very thick bricks (about 1m thick), but its height can vary from one monument to the next. The outside is decorated with pilasters, false doors or windows.

The svarloka usually has three storeys in the same style as the base, and features a main door and other, false, ones. It is decorated with small sandstone or brick statues representing mythical animals, which are mounts ridden by gods in the Indian tradition: birds, swans, buffaloes, elephants or lions. There are small decorative towers at the corners of the 1st and 2nd storeys. This roof, made of sandstone or brick, can be either pyramidal or boat-shaped.

My Son was rediscovered in 1885 by a group of French soldiers. In 1895, C. Paris, a French scholar, was the first one to clear the My Son Sanctuary. Then, many scientists came to My Son to study Cham epitaph, sculpture and architecture such as Henri Parmentier, C. Carpeaux, P. Stern…

Thanks to Henri Parmentier, the temples of My Son were classified into groups of letters (A, A’, B, C, D, E, F, G, H and K), and then numbered according to their functions. It starts with the main sanctuary, the kalan, (number 1), then the gate tower (number 2), and so on. Even though these categories break up the architectural complex of My Son as a whole, they are remarkably efficient for the study and maintenance of the ruins.
In December, 1999, at the 23th meeting of World Heritage Committee of UNESCO in Marrakesh, Marocco, My Son was recognised as world cultural heritage based on two prominent criteria: criterion (ii) an exceptional example of cultural interchange, with an indigenous society adapting to external cultural influences, notably the Hindu art and architecture of the Indian sub-continent and criterion (iii) the Champa Kingdom was an important phenomenon in the political and cultural history of South – East Asia, vividly illustrated by the ruins of My Son.