As a young girl, I have nothing but enthusiasm for exploring new land. On a beautiful day I decided to pack my bag and headed to Cu Lao Xanh, Green Island, which I had heard much about but never had a chance to visit. 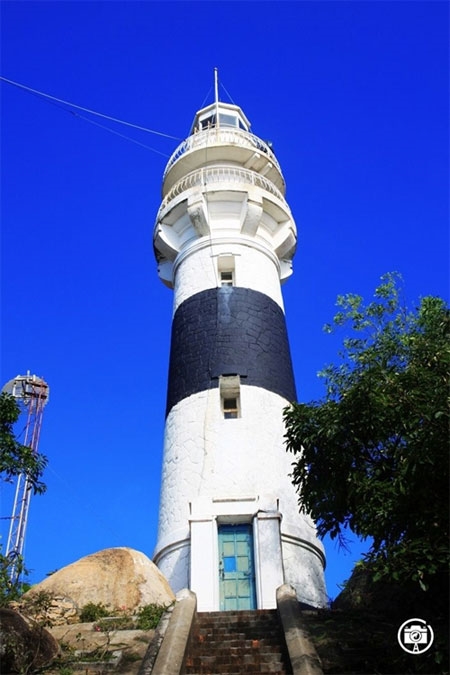 Built by the French: Cu Lao Xanh Lighthouse is one of the most-visited destinations on the green island. The structure is a unique combination of Western Gothic and Asian elements. — Photo timeoutvietnam.vn

Cu Lao Xanh (Green Isle) or Van Phi Island is located near the Xuan Dai Bay in Nhon Chau Commune in Binh Dinh Province. Covering an area of 365 hectares, the island is just 17 kilometres away from Quy Nhon City, so it took me just about two hours to reach the island by boat from Ham Tu Harbour.

On approaching Thi Nai Port, I was stunned by the grand beauty of the huge statue of Vietnamese hero Tran Hung Dao (1228-1300) and the Phuoc Mai Lighthouse. Built by French colonists over 100 years ago, the 52-metre lighthouse is like a welcoming or farewell signal to ships travelling back and forth to the city.

My first stop is Cu Lao Xanh Light Station, which is built parallel to Cu Lao Xanh Lighthouse on top of a 120-metre hill. It is a two-storey building with a unique structure and used to serve as a pleasure house of a French official during the anti-French war.

At the back of the station is a 19-metre lighthouse which was finished in 1890 after a ship sank on colliding with the reef in Quy Nhơn Sea. At first, the lighthouse was named Plogam Bir, and like other buildings within the station, its structure is the perfect combination of Western Gothic and Asian elements.

Over the past 100 years, Cu Lao Xanh Lighthouse has become a loyal friend to fishing boats from every corner of the country that passes by. Its light has become the belief and hope for fishermen in countless sea storms. The lighthouse standing high and firm above the vast sea is a symbol of the islanders’ strong will in cohabiting with the strong waves all year round.

Standing on top of the mountain and by the foot of the lighthouse, I was overwhelmed by the beauty of the scene below. The Green Island stretched out in front of my eyes like a giant picture in green - of the coconut trees sweighing in the wind to the endless rows of tropical almond trees along the seashore.

From the lighthouse, I moved down toward the northwest to visit Gieng Tien (Fairy Well) Stream. Legend has it that on moonlit nights, fairies used to descend and go sightseeing, bathe in the stream, play around before flying back to their abode in the sky. Every visitor to the island is advised to bathe in the stream and experience its pure fresh water with its salty smell

Leaving the Fairy Well Stream, I moved down to the foot of the mountain then followed a roughly 3km-path decorated with rows of colourful flowers to the north of the island. On contemplating the piles of rocks of all shapes and sizes, observing the funny dancing feet of the seabirds, I felt immersed in the beautiful nature.

There were also small sand dunes in which the sea turtles often lay their eggs. If a tourist is lucky enough, he might have a chance to see the tiny turtles crawling on the sand toward the sea. It would also be a great idea to bring along a fishing rope: when tourists are tired from walking, they can sit on some rock cliffs and go fishing, or wade in the water to catch some vu nang snails, a local specialty. What can be more pleasant than to enjoy the seafood one has just caught, grilled on the spot with friends or family members.

I decided to go back to the fishing village and was treated to a simple meal of fresh seafood by the villagers. After lunch, they led me to the southern part of the island, right in front of the village, to see the coral. Despite growing next to a densely-populated fishing village, the coral there was still in primitive condition. I did not have to dive deeply in order to observe the variety and beautiful sparkling colours.

When the sun started to set, I was struck by another peaceful scene of villagers fixing their nets while happily taking to each other on the beach, little children playing around while the fishing boats were bobbing on the waves in the last rays of sunlight.

The blue sky, blue sea, green island and beautiful natural scenes of Cu Lao Xanh have left a long-lasting impression. The island is truly a precious gem in the sea and a destination that should not be missed when exploring Binh Dinh Province.