The stunning karst pinnacles of Ha Long Bay are one of the jewels in Vietnam’s crown, but as Ron Emmons discovers, nearby Bai Tu Long Bay boasts the same beguiling scenery – without the crowds. 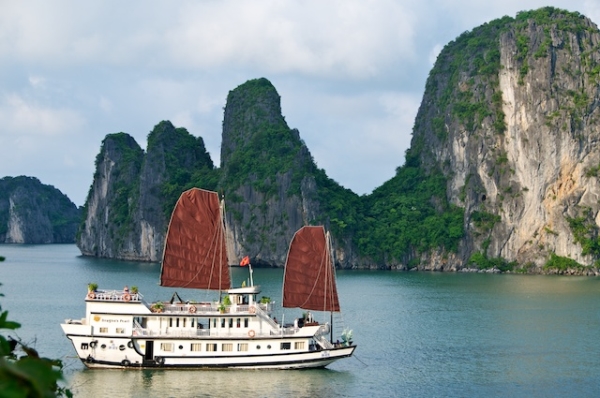 After three days cruising through the jaw-dropping scenery of Bai Tu Long Bay, and taking about 5000 photos of rugged limestone outcrops jutting from the emerald waters, I felt totally karst out. Yet many magical moments of this trip had burned themselves into my brain – I knew it was a journey I’d never forget.

Bai Tu Long Bay is located some 30km to the east of Vietnam’s number one attraction, Ha Long Bay, but is less visited thanks to its harder-to-reach location and fewer accessible caves. The rewards, however, are worth the little extra effort it takes to get here. Visiting Bai Tu Long Bay is a more peaceful experience, with extra time for kayaking and swimming among the awesome rock formations that assume all manner of fanciful shapes across this ocean landscape. Some of the larger islands also feature forest reserves sheltering rare species, while dugong swim in the surrounding waters

I was to spend my trip on the Dragon’s Pearl, a large wooden junk-come-cruise boat painted white with enormous red sails. Boarding set the tone for the trip: shortly after stepping aboard, I suddenly realised we were under way, though I hadn’t even heard the engine start or felt any rolling movement. Things continued just as smoothly for the next few days, as we glided away from the workaday world and into a dream realm of towering cliffs, gaping caves, lush growth sprouting from limestone peaks and hawks soaring on air currents above. 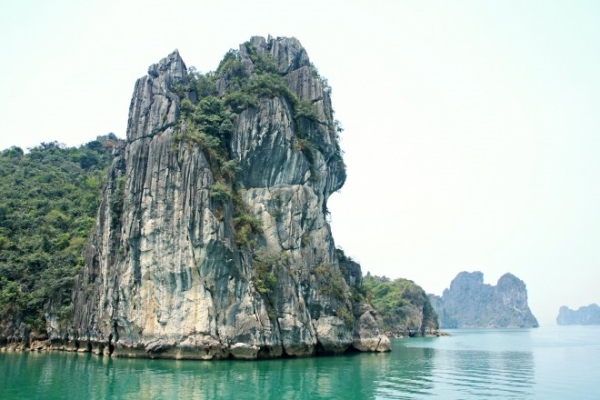 My shipmates were an intriguing bunch of global travellers, including a pair of cashew nut importers from the Czech Republic, a mountain guide from the USA and a graphic designer from Mexico. Most of them, like myself, had left this experience until the end of their travels: the icing on the cake after exploring this beautiful and welcoming land. Thus our talk over the five- and six-course lunches and dinners of delectable Vietnamese cuisine ranged from the floating markets of the Mekong Delta to the glowing lanterns of ancient Hoi An. We waxed lyrical about the stunning landscapes of the Dong Van Karst Plateau Geopark in the country’s extreme north, and shared stories of dangerous road crossings in Hanoi and Saigon.

Our guide, Phuc, ran a tight ship. As well as being fluent in English and French, she turned out to be an expert kayaker, leading us into hidden caves and to deserted beaches, where we were free to float on our backs in secluded bays sheltered by towering limestone cliffs. On one occasion, she needed to step in to stop a game of beach football, which was being fiercely contested between crew members and passengers (of which there was about a one to one ratio), in order to get us back to the Dragon’s Pearl in time for one of our memorable meals.

Sadly there was a reminder of the world we had escaped: flotsam (debris), consisting mostly of Styrofoam and plastic bottles, which washed onto these beaches. I was pleased to see members of our crew collecting as much as they could, but such sights made most passengers voice concern for the future of this fragile environment, where birds and aquatic wildlife can die if they accidentally eat man-made rubbish.

On the second day a side trip took us to a floating village of families who lived by fishing and pearl farming, and though their simple houses consisted of a single room with a hammock swinging in front and in some cases a dog on the porch, I’m sure I wasn’t alone in envying the tranquillity and contentment that emanated from this waterborne community.

All too soon our voyage was coming to an end, but on the last evening, Phuc suggested we dress in our best as the crew had prepared a surprise. Instead of sitting on deck for our meal, we were taken to a cool, candle-lit cave, where a table decorated with vegetable and fruit carvings was set for dinner. An excited babble echoed around as we devoured grilled shrimps, tender strips of marinated beef and a tangy salad. The evening’s finale came when a cake was produced to celebrate the honeymoon couples on the boat. We ended the night with a toast to future travel discoveries as magnificent as this one.