Mayu Ino was 24 when she first came to Vietnam and decided to stay back despite her mother’s pleas.

Now 47, she is visiting Nguyen Ngoc Giau's farm in the southern province of Dong Thap on the morning of May 20. She has a jacket and conical hat."Aunt May," Giau and his family call out at seeing the Japanese woman. They stop their work on the vegetable farm, walk toward her and hug her warmly. Ino visits his place several times a month.

Giau, 48, has been farming since he was a child. In 2018 he was excited to hear about sustainable and healthy farming methods while on a visit to a farm managed by Ino in nearby Ben Tre Province.She was also running a non-profit called "Seed to Table", which sought to link consumers with farmers rowing eco-friendly crops, and after linking up with it, Giau started growing organic vegetables on his 1,300-meter plot of land.

He began to use green manure, which refers to a crop plowed into the soil as a fertilizer. After two years he discovered his soil had improved and without much cost, while his vegetables began to fetch higher prices. "Organic farming means saying no to fertilizers and chemicals," he said. "Since adopting this, we do have to worry about our health." He is one of three farmers in Cao Lanh Town to work with "Seed to Table". 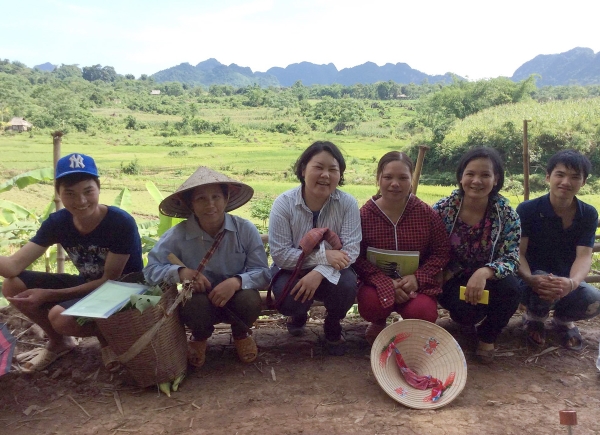 Ino, who grew up in a place where natural resources are limited, knows Vietnamese farmers are blessed with fertile soil and ideal weather for farming. But she feels this day they use too many chemicals and imported non-native seeds, which she fears harms the environment and affects the quality of their crops.

"I want to help them get rid of poverty by using their own resources."She studied history at the National University in Hanoi, and after graduation worked for a Japanese NGO in Vietnam until 2009.She turned down her mother’s plea to return to Japan and get married, and instead stayed back in Vietnam and set up "Seed to Table".

Bringing an ancient rice back from the brink

Earlier this month farmers in several northern provinces harvested their paddy crop. But in Nam Son Commune in Hoa Binh Province’s Tan Lac District, the harvest is three months away.Local farmers grow "Dai Bac Tam", an ancient variety of rice originally grown by the ethnic Muong and whose growing time is double that of normal varieties. It contains more nutrition and fetches double the price of most rice varieties.

Not many people know that "Dai Bac Tam" rice was on the verge of extinction more than a decade ago. Ino had visited the area while working for the NGO, knew the sad story and somehow wanted to conserve it.

She thought to herself: "This kind of rice is good because it has adapted to local conditions. Chasing after imported seeds will make farmers lose a valuable genome that many people in the world are scouring for."She spoke with local elders and authorities and managed to collect more than 20 varieties of ancient rice including "Dai Bac Tam".

She grew them in an isolated area to see if they could be grown productively.During this time she traveled regularly to the villages and stayed with locals to understand their life and work."I wanted to work, eat and sleep with them. Every night, by the light of oil lamps, we ate corn and spoke about everything," she recalled.

Ino and the others’ efforts helped Chien Village revive "Dai Bac Tam" rice within three years, when they began to grow five tons per hectare. Soon 350 households in Nam Son Commune started growing the rice with little chemical or fertilizer use.

Most of them have adopted organic farming, he added.In 2011 Ino visited the southern part of the country and convinced farmers in Ben Tre Province to take up organic farming. It took time for her to show them how to adopt green manure and grow vegetables based on new modules such as rice-duck and rice-fish.She founded duck and not cattle ‘banks’ to support poor farmers. Each is given 25 ducks and a cow to breed ducklings and calves. After that the farmers can use their waste as manure and use the newborns to repay the ‘bank’.

Ino’s organization has changed the lives of hundreds of households in Hoa Binh Province and more than 1,000 in Ben Tre Province by helping them overcome poverty, and is starting to help farmers in Dong Thap adopt sustainable agriculture.She knows farmers are afraid of change.

"I encourage them to try again if they do it incorrectly. But if they leave the group and then ask to join again, I do not agree. I get angry sometimes.""What can I do to make farmers think about long-term profits instead of short-term ones?" she has asked herself many times.

Another problem is red tape. In 2018 she helped build a coconut processing plant and a vegetable packaging plant in Ben Tre. But the procedures to get approval took more than four months. Later, when people in other districts in the province asked to build more plants, she refused to help because during the four months of waiting there had been "too much pressure."

After more than two decades she now knows how to make farmers stick to long-term goals. Since 2017 she has been taking her organic agriculture campaign to secondary and high school students in Ben Tre and Dong Thap provinces. The vegetables these young people grow have been sold to consumers.

"They are real seeds, they will continue what I am doing in future," she said contentedly.

It is the sincerity and warmth of the people that keeps her in Vietnam. The Nung ethnic people in Cao Bang Province in the far north call her every year before the Lunar New Year holiday and tell her to return.The Muong in Hoa Binh call her whenever they have a party. In the Mekong Delta, they try to cook her favorite dishes and give her the sweetest coconuts they have.

Tu Thi Viet Nhung, a specialist at the Vietnam Organic Agriculture Association, was very impressed by Ino’s work and personality during a trip to Ben Tre. "She has spent her youth for Vietnamese farmers. She lives with Vietnamese culture, speaking Vietnamese and ethnic Muong, drinking Vietnamese wine, loving Trinh Cong Son’s music, and enjoying noodles with shrimp paste."

But it could all be coming to an end. Ino’s campaign in Dong Thap will finish in 2023. Her mother, now in her seventies, is looking forward to seeing her daughter back home, but Ino is not sure."If I am not in Vietnam, I will travel to other countries to help poor people."