The Japanese government will help Vietnam fight imported counterfeit goods, hoping to enhance the effectiveness of rules under the Trans-Pacific Partnership trade deal. 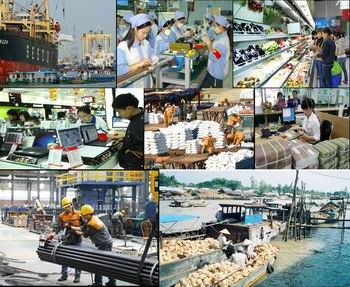 The TPP's chapter on intellectual property provides stronger copyright and trademark protections than other trade pacts, such as letting authorities expose infringement cases even without complaints from rights holders. But businesses can't benefit fully unless all of the dozen TPP members enforce these rules properly. Tokyo thinks emerging economies have room to improve their skill at combating knockoffs and wants to help them, starting with Hanoi.

Japan will show Vietnamese border officials how to tell fake goods from legitimate products. And a framework is needed for regulators to join forces with the retail industry to block imitation products. These measures will be part of the cooperation that Japanese Trade Minister Motoo Hayashi will pledge with Vietnamese officials Saturday in Hanoi.

Counterfeit motorcycles and other products are flooding into Vietnam via China, a Japanese trade ministry official says, and expert counterfeiters make it hard to spot some knockoffs based simply on the products' appearances.

Tokyo plans to expand its support to Malaysia and other TPP countries, contending that reducing inflows of imitations will increase imports of legitimate products from Japan.

Japan and Vietnam also will expand their alliance in the textile industry. The TPP will eliminate tariffs if a certain proportion of a product is manufactured in the region. The two countries will consider subsidies and tax savings for Japanese manufacturers opening factories in Vietnam. They plan to discuss these measures on a regular basis, holding the first meeting in June, under an agreement to be inked Saturday.

Japan's exports to Vietnam grew 21% on the year to 1.51 trillion yen ($13.5 billion) in 2015. Vietnam's population is expanding, and Tokyo hopes to do more business with the Southeast Asian nation, seeking to lift exports above those to China and South Korea.