A proposal for “joint patrols” between Indonesia and Australia in the eastern part of the South China Sea, which was raised in October 2016, became highly publicised just before President Joko Widodo’s visit to Australia in February 2017. 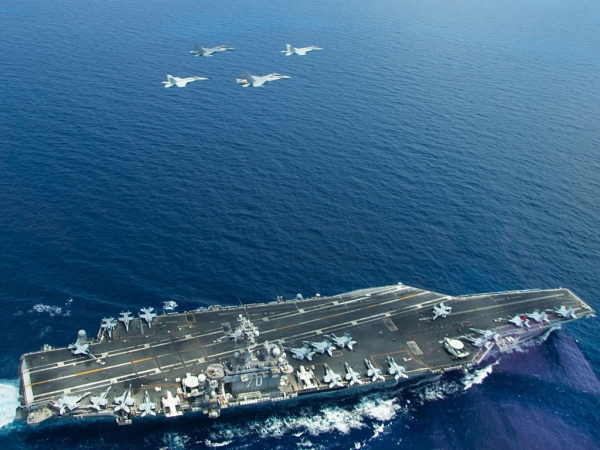 On the other hand, Indonesia has asserted sovereign rights over its own territorial waters, as seen particularly in its firm law enforcement when dealing with illegal fishing activities in Indonesian waters. Safeguarding territorial integrity is a specific focus of the Joko Widodo (Jokowi) presidency, and one he is very serious about. In 2016 there were three incidents of fishing vessels from China operating without permission in Indonesia’s Exclusive Economic Zone. Following these, President

Widodo led a high-level delegation to the Natuna Islands for a meeting of ministers and security force chiefs on an Indonesian warship watched over by air force jets. This, nonetheless, has not resulted in any visible shift in policy.

In October 2016, following the “2+2” dialogue between Indonesian and Australian

foreign and defence ministers, the Indonesian defence minister said he had proposed that the two countries conduct joint patrols in the eastern part of South China Sea to secure the waters. Few details were provided as to the nature of these patrols, whether they should be joint or coordinated, and the locations. News reports were blown out of proportion following comments from the two sides, thus making the idea seem more definite than it actually was.

At the time, Australia’s foreign minister Julie Bishop appeared to confirm that Canberra was considering joint patrols, as reflected in her comments to the media.

China Sea and that this would be consistent with both countries’ exercise of their right to freedom of navigation.

A few days before his visit to Australia on 25 February 2017, President Widodo, when answering persistent media questions, said such joint patrols could be carried out “only if there was no tension in the region”. This comment again raised the question of how serious the plan really was. As it turned out, after the meeting between the two leaders in Canberra, the issue was not raised at all during their joint press conference.

Not long after, the two countries seemed to have completely backtracked on the idea. Clarifying on the sidelines of the Indian Ocean Rim Association (IORA) summit in Jakarta, Foreign Minister Bishop said President Widodo never suggested joint patrols in the South China Sea. Indonesian officials never confirmed specific plans for joint patrols either.

In 2016, the Australian Border Force and its Indonesian counterpart, Badan Keamanan Laut, (BAKAMLA, Indonesian Maritime Security Board) conducted a maritime security patrol dubbed Operation Shearwater in the Timor Sea. Thus, joint patrols per se is not a controversial idea. However, this particular proposal was appealing to the media and wider public owing to the magnitude of the South China Sea disputes, and the fact that two big regional neighbours are involved.

The proposal itself has hardly gained domestic support both in Indonesia and Australia, with experts warning it could potentially raise tensions with China. Similar to the incidents in Natuna waters in early 2016 this is the kind of news that grabs headlines. Both Indonesia and Australia are important stakeholders in the South China Sea -- the more they are involved, they more impact they bring to the disputes and prompting analyses on how much it would influence the situation in South China Sea.

There have long been calls for Indonesia to play a greater role in dispute resolution. This proposal may at first glance look like an answer to this call, but in reality it is not. There have been occasions since last year that signalled a possible shift in policy; nonetheless, aside from occasional rhetoric, there is very little evidence in terms of policy.

Therefore, it was not really a surprise that the topic did not surface during President

Widodo’s Australia’s visit, as trade and investment were on top of his agenda. Bilateral security cooperation was not a matter of priority, particularly with regard to the South China Sea.

This proposal is a distant prospect even before considering the technical and operational aspects of such activity, because all the policy elements to make it probable are not there. Firstly, there is little chance there would be a dramatic change in Indonesia’s foreign policy towards the South China Sea. Indonesia’s position remains ambivalent.

Secondly, Australia’s involvement in the disputes has been relatively minimal, if any. For example, after the international arbitration ruling at The Hague, while demanding that China accepts the finding and respect international law, the Australian government declared Australia as neutral in the dispute over territories and therefore did not take sides.

Thirdly, although the two countries collaborate in maritime security activities, there still exists a trust deficit in their military cooperation. It was only during President Widodo’s visit that Indonesia and Australia restored military cooperation which was suspended over “technical reasons” believed to relate to offensive materials displayed at an Australian base.

True, Indonesia puts great importance in preserving its territorial sovereignty around the Natuna waters, and Australia has great interest in the South China Sea with regards to its trade and shipping. However, this particular proposal for joint patrols in the South China Sea is not likely to become a reality.