China appears to have positioned “significant” weapons systems, including anti-aircraft and anti-missile systems, on all seven of the artificial islands it has built in the South China Sea, despite vowing it had no intention of militarising the archipelago, a US thinktank has claimed. 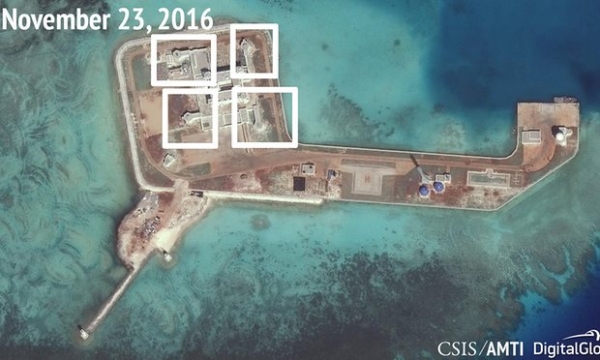 During a state visit to the US last year President Xi Jinping publicly stated that China did “not intend to pursue militarisation” of the strategic and resource-rich trade route through which about $4.5tn (£3.4tn)

However, satellite images released on Wednesday by the Asia Maritime Transparency Initiative (AMTI) at the Centre for Strategic and International Studies appeared to show Beijing was doing just that.

The Washington-based group said the images, which were taken last month, showed what appeared to be anti-aircraft guns and close-in weapons systems (CIWS) installed on man-made islands in the South China Sea’s disputed Spratly archipelago, where Brunei, China, Malaysia, the Philippines, Taiwan and Vietnam all have territorial claims.
In a report, China’s new Spratly island defences, the AMTI said its analysts had identified what appeared to be defence “fortifications” on Fiery Cross, Mischief and Subi reefs.
Anti-aircraft guns and what were likely to be CIWS to fend off cruise missile strikes appeared to have been built on two other reefs, Hughes and Gaven.
“These gun and probable CIWS emplacements show that Beijing is serious about defence of its artificial islands in case of an armed contingency in the South China Sea,” the AMTI said.
“Among other things, they would be the last line of defence against cruise missiles launched by the United States or others against these soon-to-be-operational air bases.”

Facebook Twitter Pinterest
Apparent weapons systems on Johnson reef in the South China Sea. Photograph: Digitalglobe/Reuters
Regional experts told the Guardian the images gave the lie to China’s claims that it was not militarising the region.
Advertisement
“Beijing is militarising the Spratly islands despite the fact that it has said it would not,” said Ashley Townshend, a fellow at the University of Sydney’s United States studies centre.
“Beijing did say earlier in the year that it reserves the right to defend its artificial islands if necessary, and it has tried to portray these sorts of defences… as a tit-for-tat response to American naval presence in the region. I’m sure we will see this in the coming days. But, however you want to look at it, this is an act of militarisation.”
Ian Storey, a South China Sea expert at Singapore’s Institute of Southeast Asian Studies, said: “The new satellite images clearly show that despite President Xi’s pledge that China would not militarise the South China Sea, that process of militarisation continues apace.
“Although China claims that the main purpose of its artificial islands is for civilian purposes, regional observers simply don’t buy it,” Storey added.

Facebook Twitter Pinterest
Suspected weapons installations on Gaven reefs. Photograph: Digitalglobe/Reuters
“It’s been glaringly obvious from the outset of China’s reclamation projects that the primary purpose of these artificial islands is strategic: to enable China to project military power into the very heart of south-east Asia’s maritime domain so as to enforce its territorial and jurisdictional claims in the South China Sea.
Advertisement
“The installation of these air defence systems indicates that the facilities are nearing completion and ready to host air and naval assets on a permanent basis.”
Greg Poling, AMTI’s director, told Reuters the images suggested China was “prepping for a future conflict”.
“They keep saying they are not militarising, but they could deploy fighter jets and surface-to-air missiles tomorrow if they wanted to … Now they have all the infrastructure in place for these interlocking rings of defence and power projection,” Poling added.
Australia’s foreign minister, Julie Bishop, accused Beijing of “creating an environment of tension and mistrust” in the South China Sea.
Without specifically naming China, Bishop warned that the construction of artificial islands and “possible militarisation” of the region would “lead to reputation and other costs for claimants engaging in such behaviour”.
Speaking in Beijing on Thursday afternoon, foreign ministry spokesman Geng Shuang rejected the suggestion that the installations represented a “military deployment”.
Geng said it was “completely normal” and China’s “inherent sovereign right” to carry out construction work and install defence facilities on what it considers its territory.
Barack Obama’s ‘Asian pivot’ failed. China is in the ascendancy
The photographs were released just days after the US president-elect angered Beijing by hinting he may be preparing to take a harder line over issues such as Taiwan and its activities in the South China Sea.
In an interview with Fox News last Sunday, Trump accused Beijing of “building a massive fortress in the middle of the South China Sea, which they shouldn’t be doing”.
In a recent article for Foreign Policy, one Trump adviser complained that Obama’s “meekness” had encouraged “Chinese aggression” in the region.
Advertisement
“Beijing has created some 3,000 acres of artificial islands in the South China Sea with very limited American response,” wrote Peter Navarro, the author of a book called The Coming China Wars, urging Trump to impose a “peace through strength” policy on the the region.
Townshend said many of those around Trump believed Beijing’s increasingly assertive behaviour in the South China Sea was evidence it no longer respected the Obama administration or the US.
“It is safe to assume that he will want to correct this image … We can expect him to continue the existing programme of freedom of navigation operations, and probably to step them up in some way. Maybe this will be increasing the frequency of patrols, or going to places that the Obama administration has been hesitant to go – such as actually undertaking a non-innocent passage military patrols within 12 miles of an artificial island. We haven’t seen this yet.
“This would be in line with what appears to be Trump’s more hawkish approach to China policy.”
Storey said that in the wake of the latest images: “The Obama administration will undoubtedly reiterate its call for all parties to halt the militarisation of the South China Sea, but it is unlikely to take any concrete action.
“Indeed, in the face of these revelations it has very few options. Until [Trump’s policies for Asia become clear] we wait.”
Townshend said that having been concerned that a Trump White House might pull back from the region, the US’s regional friends were now worried he might come down too hard on China.
“Initially we had fears that Trump was going to be a bit of an isolationist … Now the big question for allies and partners is this: not will Donald Trump’s China policy be too weak, but will it be too strong?”