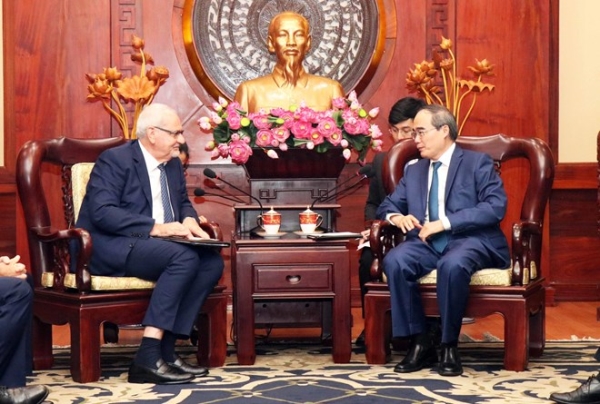 At a reception for the IFC’s CEO Philippe Houerou in HCM City, Nguyen Thien Nhan, Secretary of the municipal Party Committee, said the southern metropolis will further coordination with the corporation to implement projects, aiming to improve living standards of locals.

He said amidst the rapidly increasing population and semi-permanent houses making up only about 60 percent of houses in the city, the housing sector will create big opportunities for construction contractors.

For his part, Philippe Houerou rejoiced at cooperation between the two sides, stressing that the IFC stands ready to join hands with HCM City to settle difficulties in urban development such as smart transport system building and green energy development.

The IFC will firstly cooperate with the city in implementing a credit rating project and expand projects under the public-private partnership (PPP) model, he said.

IFC leaders will always accompany HCM City in smart urban development and believe that the city will become a model in the region and the world in this regard, the official noted.

The IFC is willing to partner with HCM City to address issues regarding the building of environmentally-friendly houses, urban transport development and the transformation of waste into energy, he said.

IFC—a sister organization of the World Bank and member of the World Bank Group—is the largest global development institution focused on the private sector in developing countries. It has operated in Vietnam since 1992.