The 10th version of the Hue Festival in the central province of Thua Thien-Hue will highlight the five local UNESCO-recognised World Heritage items, according to the festival’s organising board. 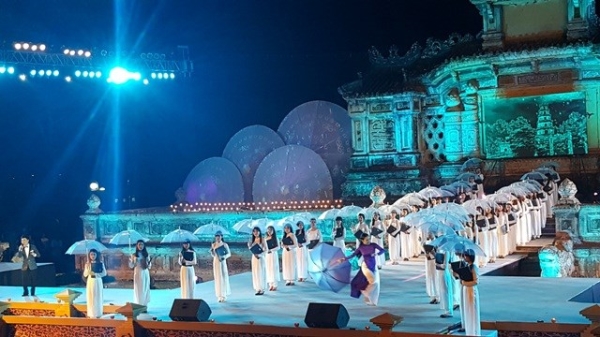 Chairman of the organising board Nguyen Dung said the Hue Festival 2018, to take place from April 27 to May 2, will continue with its mission to promote the unique cultural values of Vietnam in general and the ancient imperial city of Hue in particular.
Like its previous nine editions, the biennial festival will also serve as the venue for cultural exchanges among nations with the participation of many art troupes from around the world.
The theme of the 10th festival will be “Cultural Heritages with Integration and Development - Hue: One destination, Five Heritages”.
Hue, which was the imperial capital of Vietnam for hundreds of years, is home to five heritages recognised by UNESCO, which are the Hue ancient citadel relic complex – a World Cultural Heritage site; Nha Nhac (Hue royal court music)- an intangible cultural heritage item; Nguyen Dynasty’s wood blocks – a documentary heritage item; Nguyen Dynasty’s Chau ban (royal administrative documents) – part of the Asia-Pacific Register of UNESCO’s Memory of the World Programme; and literature on Hue royal architecture - a documentary heritage.
The Hue imperial citadel relic has been ranked second among top seven tourism attractions of Vietnam in 2017.
Director of the Hue Relics Preservation Centre Phan Thanh Hai said this is the second year in a row the Hue Imperial Citadel has received the title. The most visited tourist site is Thang Long Imperial Citadel in Hanoi.
In 2017, Thua Thien-Hue province aims to draw between 3.3-3.5 million tourists, with foreign visitors accounting for 40-45 percent, generating 3.2-3.3 trillion VND (140.7-145.1 million USD), up 8 percent in volume and 3 percent in value from 2016.