About 100 doctors, nurses, and experts from at least six leading hospitals and one medical university in Ho Chi Minh City on Wednesday managed to separate a rare pair of conjoined twins in a landmark surgery performed entirely by Vietnamese professionals.

The twins are daughters of Thuy, a 25-year-old woman living in the city’s District 9.Last year, in Thuy’s 16th week of pregnancy, doctors detected that the twins shared one umbilical cord.When the twins were delivered prematurely in their 33rd week in June last year, they were suffering life-threatening malnutrition and joined at the pelvis, although all four lower extremities were present and oriented at right angles to the common torso.

Their case is considered an extremely rare occurrence.Approximately, the chance of twins being born conjoined is one out of 200,000 births and among all such twins only six percent are joined at the pelvis as these girls were.

The twins, who weighed 3.2 kilograms at the time of their birth, were then brought to the Ho Chi Minh City Children’s Hospital in Binh Chanh District.When they reached 13 months old this month and were in good health, weighing 15 kilograms with development indexes similar to those of healthy children, doctors said a surgery to separate them was finally safe to perform.

Dr. Truong Quang Dinh, director of the hospital and head of the surgical team, said that he and several medical experts and colleagues had discussed the twins’ separation surgery for a very long time before coming to the decision to perform it on Wednesday. 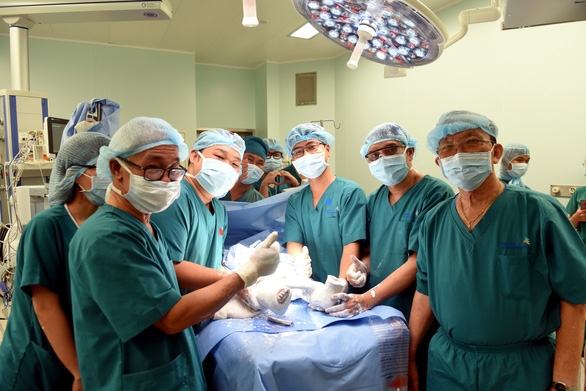 Key surgical experts involved in the operation also included Prof. Tran Dong A, 79, who is widely known for being the lead surgeon in the separation of Vietnamese twin boys Nguyen Duc and Nguyen Viet in 1988.

“We needed help from Japan [in the 1988 operation] due to lack of medical equipment, but now [Vietnamese doctors] are capable of performing the entire operation by ourselves. I think this separation surgery will mark a milestone in the development of Vietnam’s medical sector,” Dr. A said ahead of the medical operation.

Wednesday’s surgery went swimmingly and finished after seven hours, with the conjoined twins being successfully separated.Following the separation, doctors continued to perform additional operations on the children in separate rooms to adjust their bones and organs for more than nine hours.

The pair is subject to more surgeries over the next three months, according to Dr. Dinh.The twins have now regained consciousness and doctors are making plans to give them physical therapy to aid their recovery.“They are females and will likely want to have children in the future, so we will continue to monitor and give them further treatment until they are 18 years old [to make sure their reproductive systems are functional],” he said.

Prime Minister Nguyen Xuan Phuc and acting Minister of Heath Nguyen Thanh Long on Wednesday evening sent a special congratulatory message to the team of doctors who carried out the surgery and at the same time passed on their best wishes to the two baby sisters./.