Secretary of the Ho Chi Minh City Party’s Committee Nguyen Thien Nhan on August 5 hosted a reception for German investors who visited to explore investment opportunities in the southern hub of Vietnam. 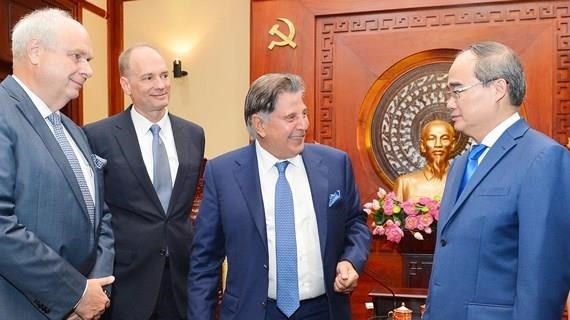 During the reception, TTI Chairman Horst Pudwill presented his idea on a 650-million-USD project in the Saigon Hi-tech Park which focuses on manufacturing of electric hand tools and power electronic converters for electrics, mechanical engineering and the Internet of Things.

Meanwhile, Chairman Horst Geicke proposed investing over 24 million USD to build a vocational training centre in District 9 as well as a plan to construct the second German House building in the city.

Pudwill spoke highly of the Vietnam – Germany relations over the past decade and wished that his company would continue receiving support from the local administration in the future projects, contributing to fostering the bilateral ties between the two countries and between Germany and HCM City.

The city leader answered questions of German investors regarding local procedures of technological appraisal, land lease and registration at the Saigon Hi-tech Park.

He affirmed that local authorities would create all possible conditions for foreign firms to do business in the city.