The Centre for Environmental Monitoring and Analysis in HCM City and the Sai Gon River Tunnel Management Centre have signed an agreement to work together to put up air and water quality readings on LED boards around the city. 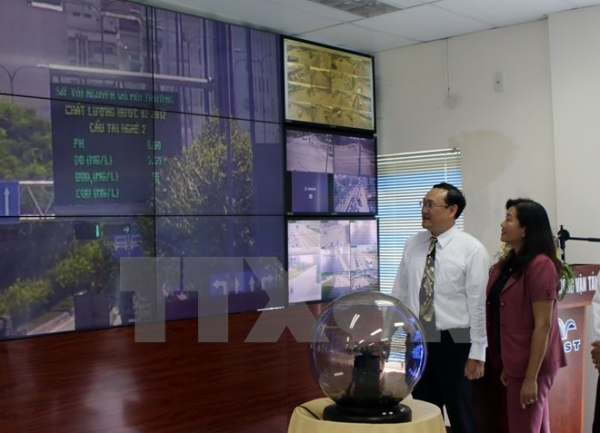 HCM City has begun to put up environmental pollution data on LED boards for public information, and the boards are controlled from the office of the Sai Gon River Tunnel Management Centre seen in the photo (Source: VNA)

The former, which is run by the Department of Natural Resources and Environment, will furnish air and water quality data to the tunnel management centre on the 25th of every month for displaying on the boards.
The readings include concentrations of nitrogen dioxide (NO2) and carbon dioxide (CO) in the air, dust, water quality in the city’s rivers and canals and noise levels.
The display is colour-coded with values displayed in green indicating no pollution threats and those in red indicating pollution levels.
Nguyen Toan Thang, director of the department, said his department plans in future to update the readings three or four times a month.
He called on the public to provide feedback if they find that the readings do not reflect the actual situation in their neighbourhood.
The first set of data put up on April 10 shows 22 areas in the city with excessive levels of pollutants or a lack of oxygen in water.
Thang said the publication of the data would help raise public awareness of environmental issues and encourage people to protect their surroundings.
Recently the department had recommended that the People’s Committee should build 27 automatic and 227 semi-automatic monitoring stations in the city.
The 495 billion VND (21.8 million USD) plan is expected to be completed by 2020.