The 31st Southeast Asian (SEA) Games will have more sports than in the past, according to the Vietnam Sports Administration. 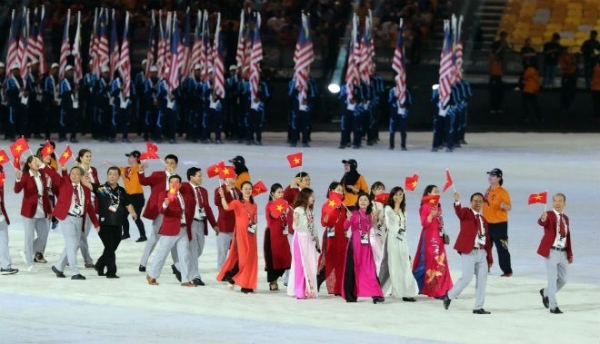 The Vietnamese sport delegation at the opening ceremony of the 29th SEA Games in Malaysia in 2017 (Photo: 24h.com.vn)
Speaking at a meeting in Hanoi on March 1, the administration named 36 sports, saying a further four will be added in the coming months.

They will be divided into three groups. One will be athletics and aquatics, another for gymnastics, rowing, football, shooting, weightlifting and martial arts and the third for 11 regional and new sports such as dancing, chess, muay, vovinam and esport.

The SEA Games is biggest sport festival held twice a year. The 31st tournament will be organised in Hanoi and the surrounding provinces of Bac Ninh, Quang Ninh, Hai Duong, Hai Phong, Vinh Phuc and Hoa Binh in 2021.

The 30th Games with a record of 56 sports will be in the Philippines later this year. Vietnam will be given the SEA Games federation flag at the closing ceremony.
(Vietnamplus)
Tweet