In a worst economic growth scenario with the COVID-19 pandemic continuing to impact the city until the year's end, Hà Nội expects a growth rate of 5.35 per cent, below its previously set target of 7.5 per cent.

If the pandemic is under control soon, the city hopes to resume growth in the second quarter and speed up in the two following quarters so it could gain growth of 7.5 per cent, meeting the goal set previously.

If the pandemic is controlled in the third quarter but still leaves negative impacts on the city’s economy, Hà Nội expects a growth rate of 6.42 per cent. 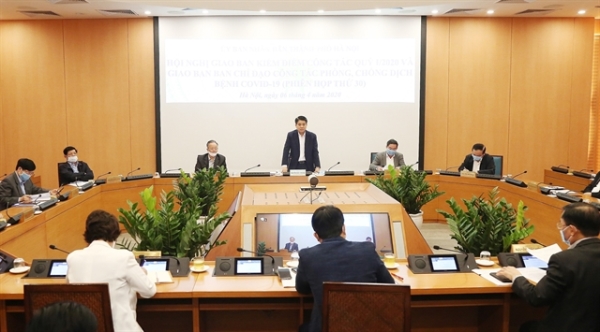 These scenarios were outlined during the city’s online meeting on Monday discussing socio-economic development in the first quarter and its efforts in COVID-19 prevention and control.

At the meeting, director of the city’s Planning and Investment Department Nguyễn Mạnh Quyền said the city maintained positive economic growth in the first quarter – 3.72 per cent in gross regional domestic product (GRDP). The rate in the same period last year was 6.95 per cent.

In the last three months, Hà Nội’s export revenue fell 18.1 per cent and import revenue decreased 21.3 per cent compared to the same period in 2019.

The city's tourism was severely hit by the travel restrictions and border shuttering around the globe, with the number of tourists to the city dropping by 47.2 per cent, and the number of foreign visitors falling by 43.9 per cent. Tourism revenues decreased by 38.8 per cent.

As much as VNĐ63 trillion (US$2.7 billion) of development investment was disbursed in the period, an increase of 5.2 per cent compared to the previous quarter while that of the same period last year was 10.5 per cent.

The city collected about VNĐ 71.4 trillion in revenues for its budget, accounting for 25.6 per cent of this year’s expected volume.

Director Quyền said the COVID-19 pandemic had impacted all aspects of life in the city.

“The pandemic has put the city under high pressure to meet its socio-economic development goals,” he said, adding that price consumer index tended to be higher last year, particularly food.

With three economic growth scenarios introduced at the municipal meeting today, Quyền said the city would devise an action plan to support business, production and to ensure social welfare in response to the COVID-19 crisis.

The city will also encourage the production of medical supplies, including face masks, antibacterial cleaning products, ventilators and testing kits to deal with the developments of the pandemic.

In its action plan, Hà Nội will review its public expenditure for more effective spending, with a plan to cut spending by 5 per cent this year.

Other key tasks the city’s leaders mentioned in the online meeting on Monday are to maintain urban infrastructure and speed up clean water supply projects and solid waste treatment projects.

At this time, the city will focus on disease prevention and control.

With the ongoing COVID-19 pandemic, the city will make efforts to prevent any other disease – especially human ones – from occurring in the changing season period, to avoid further strains on public health. — VNS