Permanent Cabinet members deliberated the social welfare package for people affected by the COVID-19 pandemic during their meeting in Hanoi on April 5. 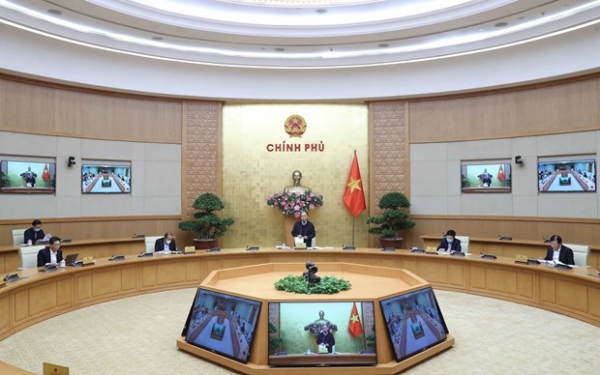 At the Government meeting (Photo: VNA)

In his remarks, PM Nguyen Xuan Phuc the Government and the entire political system have devoted workforce, time and wisdom to the fight against the disease, which has brought initial results.

Apart from declaring a nationwide epidemic, a range of essential measures have been employed across the country to combat the disease, he added.

The leader said the Government has spent time discussing the social welfare package in order to soon provide the assistance for those in difficult circumstances, stressing that after the package, the Government will focus on removing difficulties in production and businesses and accelerating the disbursement of public investment.

Through different measures and resources, the State must seek ways to support vulnerable groups, he emphasised.

In that spirit, the PM asked the Ministry of Planning and Investment and concerned ministries and agencies to submit relevant reports to the National Assembly Standing Committee on April 6.

Of the seven groups subject to the package, six will benefit from the State budget while the remaining group - businesses - will be allowed to access bank loans with a zero percent interest rate to support their workers, according to the PM.

The first priority should be given to the poor, near-poor, national contributors and those with deeply-decreased income due to COVID-19, he said.

Savings from reductions in regular spending, conferences, overseas trips and festivals, increases in 2019 income and other resources would fund the package, the leader suggested.

Stressing the responsibility of local authorities and businesses in materialising the package, PM Phuc said it is necessary to ensure democracy, publicity and transparency in the work./.
(Vietnamplus)
Tweet