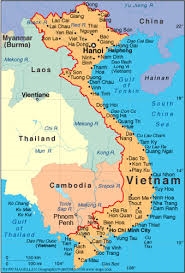 Vietnam’s topography has the elongated S form, lying in the East of the Indochinese Peninsula, in the middle of the Southeast Asia, bordering on China to the North, on Laos and Cambodia to the West and on the sea to the East and the South. Most of Vietnam’s territorial land area has the mountain and hill terrain concentrated in the North and the West; the plain areas lie mainly in the East and the South of the country. Vietnam’s sea surface occupies around 1,000,000 square kilometers; its coast line stretches 3,000 km along the South China Sea of the Pacific Ocean. The mountain and hill areas have an abundant deposit of natural resources and minerals.

In the Southwest of the Central Vietnam there is a large highland region at the height of 1,000 meters, covered by basalt soil, very suitable to industrial plants in the tropical and mild climatic areas such as rubber, tea, coffee and cacao plants.
Along the coast of Vietnam from the North to the South, there are a lot of beautiful beaches, especially Ha Long Bay with over 3,000 islands recognized by UNESCO as the world’s natural wonder. Vietnam has a lot of unspoilt pristine forests with many kinds of rare and precious animals and plants; there are a lot of regions with mild climatic conditions and unique sceneries such as Sa Pa, Da Lat and a host of lakes, streams, waterfalls and caves of uniqueness.

Mineral mines like coal, iron ore, bauxite and rare metal mines are concentrated mainly in the North and the Center; on the continental shelf and coastal areas there are a lot of oil and gas fields. Rivers, lakes and coastal areas of Vietnam have seen a lot of fish and shrimps and other fisheries.

In terms of the geographical and territorial characteristics of Vietnam, three fourths of the land area are covered with mountains and hills, but mainly low-lying hills, two great delta areas, a lot of rivers and streams and a long coastline. Mountains and highlands occupy three fourths of the territory. The mountain system stretches from the Northwestern border area to the East of the Southern part of the country with the total length of 1,400 km. The Northeastern mountain area (also called Việt Bắc – Northern Vietnam) prolongs from the Red River valley to Tonkin Gulf where there are a lot of famous places of interest such as Tam Thanh, Nhị Thanh Caves (Lạng Sơn province), Pắc Bó Cave, Bản Giốc Waterfall (Cao Bằng province), Ba Bể Lake (Bắc Cạn province), Yên Tử Mountain, Hạ Long Bay – the world’s heritage (Quảng Ninh province). Tây Côn Lĩnh Mountain Peak (Hà Giang province) is the highest in the Northeastern part with the height of 2,431 meters.

The Northwestern mountainous region stretches from the Northern border area (on China) to the West of Thanh Hoa province. This is the imposing mountain high area with Sa Pa (Lào Cai province) at the height of 1,500 meters above sea level, a well-known holiday resort inhabited by the majority of the H’Mong, Dao, Kinh, Tày, Giáy, Hoa and Xá Phó ethnic groups. The Northwestern mountainous area has the famous relic of Điện Biên Phủ battle field and Fan Xi Pang Mountain Peak of 3,143 meters, the highest in Indochina.
The Northern Trường Sơn mountain range from the West of Thanh Hóa province to the mountainous areas of Quảng Nam-Đà Nẵng, there are Phong Nha-Kẻ Bàng National Park, the world’s cultural heritage (Quảng Bình province) and such famous passes as Ngang Pass and Hải Vân Pass. Especially, Ho Chi Minh Trail is known to the world by a lot of miraculous exploits of the Vietnamese people in their great resistance war for national defence.

The Southern Trường Sơn mountain range lies in the West of the Southern Central provinces. Behind those colossal mountain ranges is the large land area called Tây Nguyên (the highlands in the west). This legendary land has borne in it a lot of mysteries concerning wild animals and plants, particularly the remarkable and unique culture of the ethnic minorities groups. Đà Lạt City – an ideal holiday resort formed in the late 19th century – has become the famous tourist center with multi-colored Flower Festival activities.

Vietnam has got two large delta regions: the Red River Delta (also called the Northern Delta) which is 15,000 square kilometers large and embanked by the silt of two large Red and Thái Bình rivers, where the ancient Việt people had once inhabited and where the wet rice civilization had been formed and the Mekong River Delta (also called the Southern Delta) which is 40,000 square kilometers large and this is the fertile land area with favorable climatic conditions. It is also the rice bowl of Vietnam.

The coast line of Vietnam is 3,260 km in length, enveloping the territory of Vietnam in three directions: East, South and Southwest. On average, there are 11 kilometers of coast line out of 100 square kilometers of main land, 6 times higher in the world. Along the coast there is a number of big urban centers, 90 sea ports, large and small, and about 100 points where sea ports can be built (including the world’s transshipment ports), 125 sea beaches with beautiful sceneries, including 20 beaches to international standards for marine tourism development. Along the coast there are various kinds of minerals and important building materials for industrial development and over 60,000 hectares of salt fields. There is an abundant source of fisheries with 75 kinds of shrimps, 25 kinds of squids and cuttle fish, 2,100 kinds of fish, 7 kinds of octopus and a lot of molluses of high economic value such as pearls, oysters, mussels and abalones.

On the other hand, Vietnam has a lot of beautiful bays such as Hạ Long, Bái Tử Long, Vân Phong, Cam Ranh and Nha Trang Bays and around 3,000 islands, big and small. Even these islands are not distributed evenly, all of them have shielded the coastal areas of Vietnam in different angles. The population in the coastal areas occupies about 39% of the whole country’s population.

As compared to a lot of countries in the world, Vietnam has possessed a priceless marine resource. Vietnam’s sea area lies in the important navigation lines and the air lines between the Indian Ocean and the Pacific Ocean, between Europe, the Middle East and China, Japan and other regional countries.
The marine potentials and resources of Vietnam are the extremely important factor and catalyst for the country’s construction and development at present and in the future.

On oil and gas: the total reserve of geographical prediction of Vietnam’s continental shelf is about 10 billion tons of equivalent oil, with the total reserve for exploitation of 4 to 5 billion tons. The total reserve of associated gas is 250 to 300 billion cubic meters. Oil and gas has seen the great prospect with the favorable exploiting conditions. Other energies: Vietnam is judged as having a great potential for developing the marine energy to produce electricity. This source of energy or also called the recycled energy comes from tidal waves, wind, temperature difference, flow and waves, in which wind and wave energies are the sources of energy being evaluated as having the greatest potential in Vietnam.

Fisheries: the reserve of fisheries is estimated at 3 to 3.5 million tons with an abundance of fisheries structure and high economic value, which is yet to be exploited properly, so only 60% of the exploitable level is reached every year. Marine transport: the ocean shipping sector of Vietnam has only occupied 16% of the market share of shipping imported cargo of the country. The shipping industry has just developed in three years now, but it has built a lot of high tonnage ships of up to 10,000 tons for export and it has become the key sector of the marine economy, promising a lot of high prospect. Marine tourism and other maritime services have also made an important contribution to the growth of the country’s GDP./.
Tweet