On July 20 New York Dessert Coffee bid goodbye to Vietnamese customers via Facebook and promised to "come back someday." 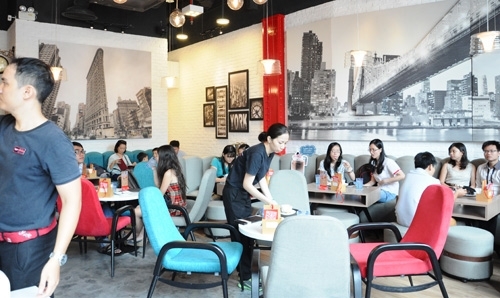 Earlier, in May the Singapore-based NYDC had closed three outlets on Nguyen Trai Street and at the Cantavil and Crescent malls in HCM City. The one at Metropolitan in downtown Sai Gon continued to operate. However, it too finally closed.

In 2012, when NYDC came to Viet Nam for the first time, the company expected to open at least 20 outlets by investing an estimated US$300 million within five years.

However, NYDC's dream of finding a firm foothold in the Vietnamese food and drink market did not materialise due to certain reasons.

And many other major foreign food and drink brands are also in the same boat, with some having had to pare their activities and others leaving Viet Nam altogether.

Burger King, for instance, debuted in 2012 with an ambitious plan to build 60 stores in five years in Viet Nam. However, it recently closed several restaurants and had only 16 as of February.

Around three years ago Gloria Jeans and Coffee Bean & Tea Leaf also had to close their larger outlets.

Analysts attribute their failure to factors like the presence of many Vietnamese chains like The Coffee House, Phuc Long, Urban Station, Trung Nguyen, Kafe, and Highlands Coffee.

The question now is if Vietnamese chains can grab the opportunities created by the withdrawal of foreign brands.

The Vietnamese coffee market is considered very promising estimated to grow at 15 per cent through 2020.

According to Kantar Worldpanel, a global expert in shopping behaviour, the Vietnamese coffee market is growing at 3 per cent in urban areas and 11 per cent in rural areas mostly thanks to instant coffee.

To tap this hugely promising market, several Vietnamese and foreign firms had vied with each other to open cafes especially chains of them, sparking fierce competition.

When the foreign coffee brands like Gloria Jean's Coffee, NYDC, Highlands and Starbucks first came, Vietnamese were instantly attracted, especially young people, thanks to their unusual tastes and upmarket image.

The US-based Starbucks Coffee Company, for instance, had a huge impact when it opened its first shop in HCM City in 2013. It became so popular that customers had to queue up for an hour for a cup of coffee. Amid the euphoria, the company quickly opened more stores and now has 16.

But the situation changed when people turned their back to foreign coffee shops after their curiosity was sated.

Explaining the change, many customers said the prices at foreign coffee shops were too high for them while the tastes were not really suitable for the Vietnamese palate.

Though local companies have emulated foreign firms and opened chains, they seem to be more successful, which is proved by the fact that their market shares have rapidly grown.

Analysts said local brands have many advantages that the foreigners do not have: affordable prices, comfortable spaces and comprehensive understanding of Vietnamese consumer behavior.

Besides, Vietnamese beverages and foods are diverse and tasty and also familiar.

Analysts expect them to grow developed rapidly. The Coffee House now has 30 shops and wants to increase it to 200 nationwide by 2020.

Passio Coffee is eyeing 50 shops before the year is out.

Spokespersons for the Vietnamese chains say that in spite of having to compete with many other local cafes they believe they will perform well since the market is big enough.

Miniso, a Japanese lifestyle and fashion brand that sells merchandise such as homeware, bags and electronics at low prices, will soon be in Viet Nam through a franchise deal inked with the local Le Bao Minh group.

Le Bao Minh said it is preparing to open the first store in Ha Noi and one more after a month. At the end of this year it plans to have 13 stores in Ha Noi, HCM City, Da Nang, Vinh, Can Tho, and Hai Phong.

The company, the exclusive distributor of Canon in Viet Nam, plans to raise the number of Miniso shops to 200 in Viet Nam in the next five years.

Some months ago the Vietnamese retail market heard that the first 7‑Eleven store would open between April 2017 and April 2018, with the world's largest convenience store chain franchising a local player.

The Japanese-owned 7‑Eleven, Inc. has signed a master franchise agreement with the Seven System Viet Nam Co Ltd, a new firm founded by a local restaurant chain, to develop and operate its stores in the country.

The expansion into Viet Nam marks the company's first stake in the Pacific Rim since 7‑Eleven entered Indonesia in 2009.

Since its arrival in the country in 2014, the retailer has invested $500 million to open four outlets in the country, the latest in HCM City's Binh Tan District in late July.

Aeon also plans to have 100 supermarkets around the country through mergers and acquisitions. It now runs 30 Aeon Citimart supermarkets after acquiring a 49 per cent stake in local retailer Citimart in 2014.

The company plans to collaborate with local manufacturers to produce consumer goods under its Top Value brand for both the Vietnamese and overseas markets.

In March Japanese Minister of Economy, Trade and Industry Motoo Hayashi and executives from four giant Japanese retailers, Family Mart, Mini Stop, 7-Eleven and Loson, and 16 other businesses came to Viet Nam to explore opportunities to bring Japanese products to the country.

During the visit the minister revealed that small and medium Japanese enterprises would be encouraged to bring their products to Viet Nam through the Japanese retail networks in the country.

Analysts said not only Japanese retailers but many others from other countries such as South Korea and Thailand are ready to enter the Vietnamese market with an eye on its massive potential.

Foreign retailers now have a 59 per cent share of the Vietnamese retail market.

Analysts have warned that domestic retailers' market share is likely to come down further, maybe even to zero with foreign businesses taking over completely, if they do not manage to improve their competitiveness.

Foreign retailers have a lot of advantages over domestic players: deep pockets and good management and an ability to raise cheap capital in their home countries.

But since Viet Nam is on the way to integrating into the global economy, it perforce has to open up its market to foreign firms. The Government could, however, put up technical barriers to protect domestic businesses.