The fisheries sector is aiming at 10 billion USD in the export of aquatic products in 2019, a year-on-year rise of 11 percent, according to the Directorate of Fisheries under the Ministry of Agriculture and Rural Development. 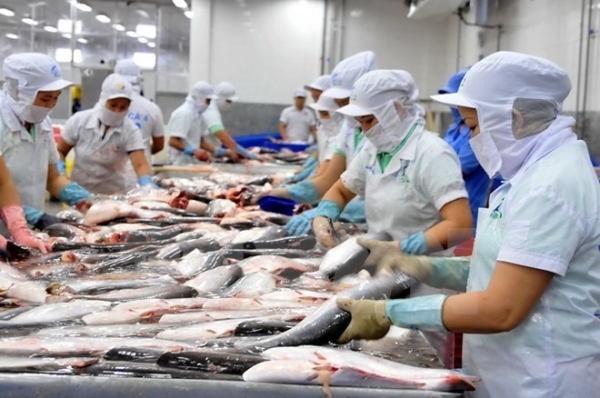 To that end, it will work to increase the total aquaculture production by 3.6 percent to 4.3 million tonnes, including 1.4 million tonnes of tra fish and 852,000 tonnes of shrimps of all kinds, up 3 percent and 6.5 percent, respectively.

It will also strive to catch 3.68 million tonnes, up 2.5 percent year-on-year.

The sector will effectively carry out the national action plan on shrimp development by 2025, the master plan on the development of the shrimp industry by 2025, and the three-tier cooperation plan for the production of high-quality tra fish breeds in the Mekong Delta until 2025.

Inspections will be intensified to control the quality of feed and products improving the farming environment, prevent the use of banned antibiotics, and antibiotic abuse in aquatic farming.

More inspection teams will also be organized to supervise the implementation of regulations related to the management and use of fishing vessels at localities, and the granting of registration licenses to ship owners.

Nguyen Hoai Nam, Vice General Secretary of the Vietnam Association Seafood Exporters and Producers (VASEP), said that it is important to pay attention to quality and brand building when increasing the export turnover.

Over the past years, the quality of Vietnam’s major aquatic products such as shrimp, tuna and tra fish has been improved, he noted.

However, in the time ahead, major importers in Europe and America will continue monitoring imports, requiring businesses and State agencies to join hands to overcome this challenge, the official added.

In 2018, the export turnover of Vietnam’s aquatic products hit 9 billion USD, a year-on-year increase of 8.4 percent.

The country recorded its highest fishery production ever in the year with 7.74 million tonnes, up 7.2 percent year-on-year.