The film, Số Đỏ (Dumb Luck), is based on the same name book by Phụng which first released in 1936 in Hà Nội.  Phụng began his literary career after releasing his first novel, Dứt Tình (Breaking Up), in 1934.He released a series of novels in realistic style, such as Số Đỏ and Kỹ Nghệ Lấy Tây (Foreigner Marrying Industry), focusing on the negative lives of local snops and social issues in the semi-feudal colonial society during French war. 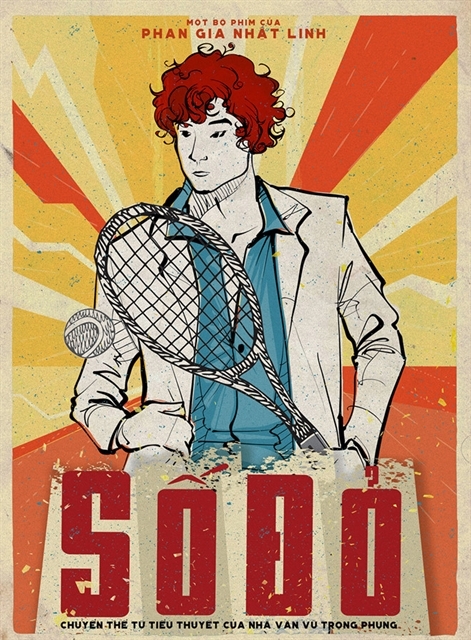 Poster of Số Đỏ, (Dumb Luck), a new film by blockbuster director Phan Gia Nhật Linh. The film is based on the same name book by late famous Vũ Trọng Phụng, which first released in 1936 in Hà Nội. Photo courtesy of the producer

He also worked as a reporter for several newspapers in Hà Nội in the 1930s.He released nine novels, seven reports, two plays, and many short stories and notes.He died of tuberculosis in 1939 when he was 27. Director Linh has worked with the writer’s family on copyright.“I’m interested in Phụng’s books, particularly Số Đỏ. His views about life and humans are still alive,” said Linh, in his recent interview with local media.

“I have received support from members of Phụng’s family. They promised to help me during shooting.”Linh’s film, Số Đỏ, features the semi-feudal colonial society of Việt Nam in the 1930s and 40s, which has two legal systems: the French rulers’ legal system and local feudalists’ system.The production is about Xuân Tóc Đỏ (Man with Red Hair), a vagabond who makes money and tries to join the upper class by cheating.Through his story, love, betrayal, family issues and the moral degradation in society are highlighted.

The film is a production by the CJ HK Entertainment and its partner, Á Việt Media.Director Linh began his career as a film critic. He got a scholarship in movie subject, offered by the Ford Foundation, at the University of Southern California in 2006.He worked with talented film directors Vietnamese-American Charlie Nguyễn and Nguyễn Quang Dũng before releasing his first comedy film, Em Là Bà Nội Của Anh (Sweet 20), in 2015.  His second film, Cô Gái Đến Từ Hôm Qua (The Girl from Yesterday), a romantic production, released in 2017.Both films were blockbusters, earning around more than VNĐ20 billion (US$850,000) each in just the first week of release.

His latest $1 million-comedy work, Trạng Tí (Child Master), features Vietnamese folk stories.It was scheduled to be in cinemas this month but postponed until February next year due to the COVID-19 outbreak.Filming of Số Đỏ is expected to begin in August. VNS