The five-star Muong Thanh Luxury Nha Trang Hotel in central Vietnam is one of many hotspots for increasing numbers of Chinese tourists who enjoy the hotel's buffet or buying local specialties, including agarwood products and hand-made jewelry inlaid with natural pearls. 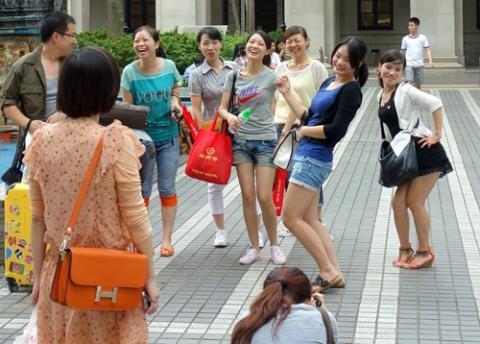 In the dining hall of the 48-storey hotel in Nha Trang City, Khanh Hoa province, most diners sit in groups and speak Chinese enthusiastically. Among them, on Sunday, two elderly couples, two middle-aged couples and a teenaged girl were sitting around a table, enjoying seafood.

"All my family members, including my parents, my wife, my daughter and I like seafood very much. The food here is delicious," the middle-aged man, named Zhang Deyi, from the central Chinese province of Henan, told Xinhua.

His daughter, swinging her braid back and forth, added: "I like the lobsters down there." Zhang explained that food at the hotel is good, but at night, the whole family preferred sitting in a restaurant near the beach along Tran Phu Road in the city, where they can pick up live lobsters and sea-urchin with their own hands and give them to local chefs to grill on charcoal.

In the evening, Hoang Sa Seafood Restaurant on Tran Phu Road was serving around 100 customers. "Most of our customers are foreigners, and nowadays, some 80 percent are Chinese tourists," the restaurant's clerk, Huu Hoang, told Xinhua, joyfully.

According to Hoang, most of the foreign visitors to Nha Trang used to be Russian, but Russia is facing an economic slowdown, so now most visitors come from China. The clerk's statement was evidenced by the fact that more and more hotels and restaurants in Nha Trang are using menus written in Chinese, instead of Russian as was previously the case.

Decked out in a black Dolce & Gabbana dress dotted with white daisies, and a matching pair of loafers and a clutch with the same pattern, Wei Chunjie, a former student of Peking University, told Xinhua that she enjoys visiting beauty spots and eating seafood with her friends, but dislikes the dual-price policies, illegally applied by some restaurants and shops here.

"We have just bought live lobsters at a price of 1 million Vietnamese dong (44 U.S. dollars) per kilogram. But half a minute later, a Vietnamese customer bought the same lobsters for 800,000 Vietnamese dong (35 U.S. dollars)," the fashionable girl said, adding that the same situation happened when she and her friends bought agarwood products. "However, agarwood products here are very good and less expensive than in China," she said, her smile utterly charming.

In Khanh Hoa Province, dubbed Vietnam's agarwood capital, it is easy to catch sight of dozens of Chinese tourists shopping at agarwood handicraft production bases or showrooms. Most products carry price tags written in Chinese; 300-1,000 yuan for an agarwood bracelet, or 1,000-3,000 yuan for a necklace, for example.

Standing next to An, a tall Chinese elderly man named Wei Yonglu, director of Vietnam-China Flavoring Company, told Xinhua in perfect Vietnamese that besides Chinese citizens who come to Vietnam merely for sightseeing, more and more Chinese people visit the country for both tourism and business purposes.

"Most business-minded Chinese come to Vietnam to tour and seek ways to import materials and export their finished products," the man said, adding that his friends often visit Vietnam to import sliced cassava to produce alcohol or bio-fuel for Chinese and foreign markets, including Vietnam's.

In the past, many Chinese visitors to Vietnam were aged between 30-40 and were from southern China and traveling on cut-price package tours by train or coach to northern Vietnam in groups of more than 20 people. In recent years, however, more and more Chinese from different provinces and cities, from various ages, come to Vietnam by air, and use luxury services.

In Nha Trang, well-off Chinese tourists often opt to buy agarwood products and jewelry inlaid with natural pearls, Khanh said, noting that they do not choose cultivated pearls which are available in China at lower prices.

The influx of Chinese visitors to Vietnam, mostly to Hanoi, the northern province of Quang Ninh, home to the World Heritage site of Ha Long Bay, and central coastal provinces such as Khanh Hoa, home to Cam Ranh Bay, and Da Nang, has been mainly attributed to beautiful landscapes, more diversified tourism services, rich cultural heritage not dissimilar to China's, better infrastructure, and more direct flights between the two countries.

"Coming to Vietnamese coastal cities, most Chinese visitors like to walk on white beaches, tour theme parks, visit islets by boat and dive there to view corals, fish and other marine species," Khanh said.

In northern Vietnam, Chinese tourists often visit Ha Long Bay and ancient buildings there as well as in Hanoi. Wei Yonglu said: "I adore Vietnamese agarwood incense and the pagodas across the country. It is interesting to see that all of the pagodas have parts such as gates, walls and horizontal lacquered boards that are engraved with Chinese characters."

However, Wei dislikes road transport in Vietnam. "Most urban roads are messy with too many motorbikes. Besides, electric wires hang down loosely like cobwebs. It is both ugly and dangerous," he said.

"We used to organize programs to promote Nha Trang, Khanh Hoa in different regions and then attracted thousands more visitors. Now, we almost don't have to advertise because hundreds of thousands of Chinese tourists come to us, and we are so thankful for this," said the department's vice chairman Phan Thanh Truc.

Near Mun islet in Khanh Hoa, Zhang Deyi surfaced from the sea in a black suit with a grayish scuba tank on his back, which made him look like a navy frogman. He'd been underwater enjoying some stunning vistas of kaleidoscopic marine life for around 30 minutes.

"It's a wonderland down there, full of colorful corals and fish and black sea-urchin. The sea's resources are very rich. I think Vietnam and China should work more closely to develop sea tourism as well as operations in other fields such as fishery and oil exploitation," Zhang suggested with a smile of contentment./.