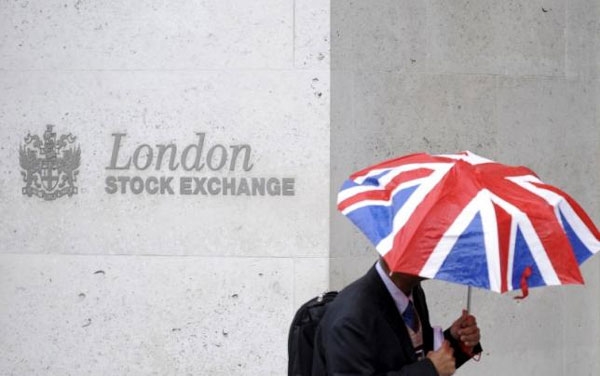 A worker shelters from the rain as he passes the London Stock Exchange in the City of London at lunchtime October 1, 2008.

Japanese stocks led the way, pushed down nearly 2 percent by the recent surge in Japanese government bond yields and the strength of the yen, overshadowing the slight rebound in European shares from Tuesday's three-week lows.

Shares in European banks HSBC (HSBA.L) and Societe Generale (SOGN.PA) rose as much as 5 percent after reporting second quarter earnings, a glimmer of light for the region's financials amid the recent gloom.

But that failed to lift the broader European indexes and U.S. futures pointed to a softer open on Wall Street ESc1.

In bond markets, yields were little changed on the day, but still well up from recent lows following the shakeout in debt markets globally since the Bank of Japan's policy meeting last Friday and as eyes turn to the Bank of England on Thursday.

"Investors are slowly realizing that with every spin of the central bank policy chamber the magazine is getting emptier," said Michael Hewson, chief market analyst at CMC Markets in London.

"The larger concern here given recent market reaction to policy moves by central bankers is that policymakers are losing the confidence of investors," he said.

The sharpest moves lately have been in sovereign bond markets where a sudden spike in yields stirred speculation that a multi-year bull run in prices might finally be nearing its end.

While Japanese bonds steadied on Wednesday they have still suffered the worst sell-off in over three years as investors feared the BoJ was out of easing ammunition and might leave it to fiscal policy to stimulate the economy.

Bond bulls were worried the Bank of England might also under-deliver at its policy meeting on Thursday, putting the onus on debt-funded government spending to support growth.

"I would vote for no change in rates or QE (quantitative easing," former BoE policymaker Charles Goodhart told Reuters, adding that the Bank has effectively run out of policy ammunition and that further stimulus would be ineffective.

"There's so much assumption that the Bank will cut rates that even though the effect of that will be minimal, they will do it, because not doing it would have an adverse effect on their credibility," he said.

The 10-year UK gilt yield was unchanged at 0.80 percent GB10YT=RR and the comparable Bund yielded -0.4 percent EU10YT=RR, both up around 10 basis points so far this week.

Benchmark 10-year U.S. Treasuries were also little changed on the day at 1.54 percent US10YT=RR, and also up around 10 basis points this week, even though domestic data has generally been soft.

The recent outbreak of weaker U.S. data has further pushed back expectations for when the Federal Reserve might hike rates -- the market is not fully priced for a move until well into 2018 -- and taken a heavy toll on the dollar.

The dollar touched a near six-week trough against a basket of currencies .DXY, while the euro reached its highest since mid-July around $1.1230 before easing back to $1.12EUR=.

In commodity markets, oil prices steadied in Asia but remained vulnerable to worries about a glut in both crude and refined product. [O/R]

Brent crude LCOc1 edged up 0.4 percent to $41.93 but remained near four-month lows reached on Wednesday. NYMEX crude CLc1 rose 0.5 percent to $39.70 a barrel, but was still under the psychological $40 level.