The 8th session of the 14th –tenure National Assembly opened in Hanoi at 9am on October 21. 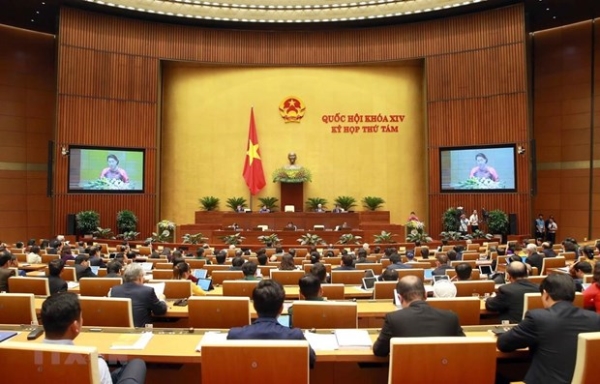 At the opening session (Photo: VNA)
The opening sitting is being broadcast alive on national broadcasters The Voice of Vietnam and the Vietnam Television, as well as on the NA’s TV channel.
Prior to the opening sitting, Party and State leaders and NA deputies laid wreaths at and paid tribute to President Ho Chi Minh at his mausoleum.
The NA also held a preparatory meeting to discuss and adopt the working agenda of the 8th session.
At this session, the NA is scheduled to pass 13 laws, 3 resolutions and give opinions on nine draft laws.
The legislature will also consider and make decision on important socio-economic and budgetary issues, including reports on the implementation of socio-economic plans and State budget in 2019, and socio-economic plans, State budget estimates and allocation in 2020.
A feasibility report for the Long Thanh international aisport project (phase one) and a master plan on investment in socio-economic development in ethnic minority, mountainous and especially disadvantaged areas will be tabled for consideration.
The Chief Justice of the Supreme People’s Court and the Prosecutor General of the Supreme People’s Procuracy will submit reports on their performance to the NA, and the Government will present reports on the prevention and combat of crime and law violations, law enforcement, and the prevention and fight against corruption in 2019.   \
The Central Committee of the Vietnam Fatherland Front will deliver a report summing up voters and citizens’ opinions and petitions sent to the the NA’s 8th session, and the NA Standing Committee will report on its supervision of the settlement of voters’ petitions sent to the NA’s 7th session. The Government is to report on the State’s external relation work in 2019.
The NA will conduct a supreme supervision of the enforcement of policies and laws on fire prevention and fight in 2014-2018.
Three days during the 8th session will be reserved for question-and-answer meeting, personnel work and discussion and adoption of the session’s resolution.
The 8th session will last through November 27./.
(Vietnamplus)
Tweet