The devastation of the ecosystem around some islands in the East Sea (internationally known as the South China Sea) is becoming serious because of China's dredging and construction activities for military purposes. 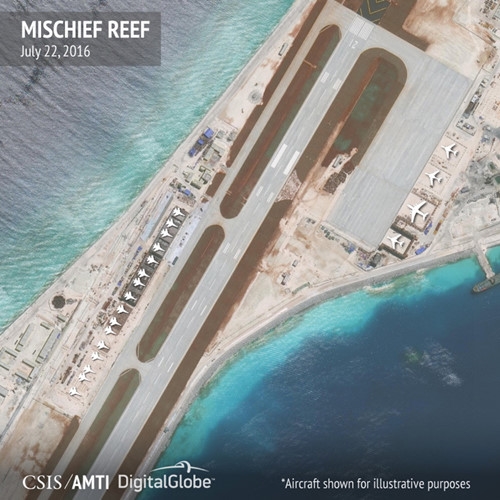 "Responsibility of protection" is always mentioned by scholars in maintaining a balance between national security and human security. But for cases mixed with sovereignty disputes, this concept is a controversial issue.
The East Sea is a good example of the contradictions of "responsibility of protection" in affecting the environment and the livelihoods of millions of people.
The devastation of ecosystem around some islands in the East Sea is due to China, plus the overexploitation of the ocean by coastal states.
Danger from artificial islands
Satellite photos show damage to the habitat of coral reefs in the Truong Sa Archipelago (Spratlys Islands).
Coral reefs in remote islands and atolls, though less affected by the direct activities of humans, are very vulnerable to development for political and military purposes. Studies of rehabilitation and dredging of rocks in the past showed heavy damage to coral reefs.
Dredging of rocks affect surrounding rocks, not only the dredged area. For example, in 1960, 440 hectares of reefs were destroyed completely on Johnson Island (USA), but more than 2,800 hectares of the surrounding rocks were also affected.
In its submission to the Permanent Court of Arbitration (PCA), the Philippine government estimated that the coral reefs of the Spratly Islands contributed about $100 million for high-value fisheries of this country. Overall, this figure can be multiplied for the whole region.
Destroying ecosystems and undermining food security is an extremely serious problem. It destroys the traditional livelihoods of communities, which makes many individuals ignore the legal framework, and traditional fisheries management to engage in illegal fishing activities.
Satellite images show that China’s construction activities at reefs and islands in the East Sea has caused significant decline of coral reefs in the area.
The coral reefs create habitats for thousands of species and provide food and livelihoods to millions of people, while protecting coastal communities from excessive weather disturbance.
Therefore, China’s activities not only pose threats to the national security of the countries involvied in the East Sea dispute but also threats to the livelihood of the people, and to the living environment in the islands and archipelagos of Southeast Asian countries.
Overexploitation of marine resources
Besides political and military activities, excessive exploitation is also a cause of the depletion of marine resources in the region.
According to the Fisheries Research Center of the University of British Columbia, the East Sea is one of the richest fishing grounds in the world. Annually it contributes an average of 11% of the world's seafood exports.
The East Sea is also the backbone of maritime trade and sea transport, and an important source of oceanic biodiversity.
However, the East Sea is where illegal fishing is rampant. According to research  by Allison Witter, the East Sea fishing ground has been overexploited since the 1980s.
Resource depletion in the near-shore waters of China has forced the country to give support to off-shore fishing, even in the disputed exclusive economic zone (EEZ). This has led to many incidents of violence between Chinese fishermen and coast guard forces and fishermen of other countries such as Vietnam and the Philippines.
As in conflict areas, depletion of natural resources increases of the risk of violent extremism, organized crime, etc .. As a region of many conflicts, even when the East Sea is a common resource, it is not within the framework of the protection of collective activities and not managed by multilateral mechanisms.
Many scholars discuss how to reduce access to resource use in the East Sea. The coastal states can choose to stand alone, enhance maritime security, and drag the whole region into conflict or build principles, institutions and define open access issues. The current unilateral and militarization trend in the East Sea is a threat to human security in the entire region.