A first draft of a code of conduct for behavior in the disputed South China Sea has been completed, Chinese Foreign Minister Wang Yi said on Wednesday, adding tension in the waterway had eased notably. 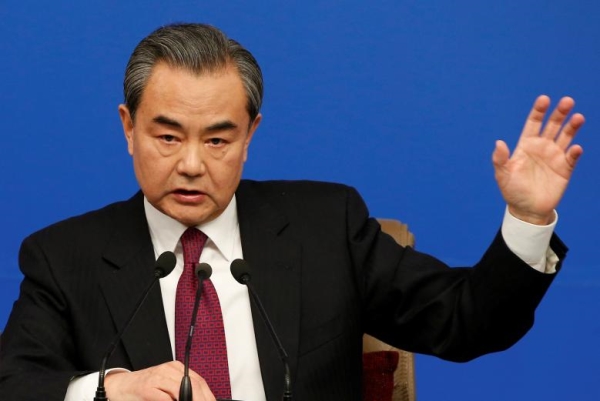 A first draft of a code of conduct for behavior in the disputed South China Sea has been completed, Chinese Foreign Minister Wang Yi said on Wednesday, adding tension in the waterway had eased notably.

Since 2010, China and the 10 members of the Association of South East Asian Nations (ASEAN) have been discussing a set of rules aimed at avoiding conflict among rival claimants in the busy South China Sea.

Speaking at his annual news conference on the sidelines of China's parliamentary session, Wang said talks last month had made "clear progress" and had formulated a first draft of a framework for the code.

"China and ASEAN countries feel satisfied with this," he said.

Wang said tensions in the South China Sea had not just "somewhat dropped, but had distinctly dropped" over the past year.

But in a nod to the United States and its regular freedom of navigation naval patrols in the region, Wang said those who still wanted to "stir up trouble" will be condemned by countries in the region.

"We definitely will not allow this stable situation, which has been hard to come by, be damaged or interfered with," he said.

The United States has criticized China's construction of man-made islands and its build-up of military facilities in the sea, and expressed concern they could be used to restrict free movement.

China has long called for what it terms "countries outside the region" - generally a reference to the United States - to stay out of the dispute, saying China and Southeast Asia are determined to resolve things peacefully.

China lays claim to almost all of the resource-rich South China Sea, through which about $5 trillion worth of trade passes each year.
Also In South China Sea.

Brunei, Malaysia, the Philippines, Taiwan and Vietnam also claim parts of the waters that have rich fishing grounds, along with oil and gas deposits.

Tensions reached a flashpoint after the Philippines filed an arbitration case against China in The Hague and as China started militarizing artificial islands it built up on reefs in the South China Sea.

The tribunal ruled last year in Manila's favor, but the election of Philippine President Rodrigo Duterte has seen a dramatic U-turn in his country's approach.

Duterte has said repeatedly he wants to avoid confrontation with China and saw no need to press it to abide by the ruling.

Philippines Foreign Secretary Perfecto Yasay has said he hoped the code of conduct would be completed by the middle of this year and help de-escalate tensions.