China has begun work or completed building infrastructure on about 72 acres (29 hectares) of land on outposts in the South China Sea this year, according to a report by the Washington-based Asia Maritime Transparency Initiative. 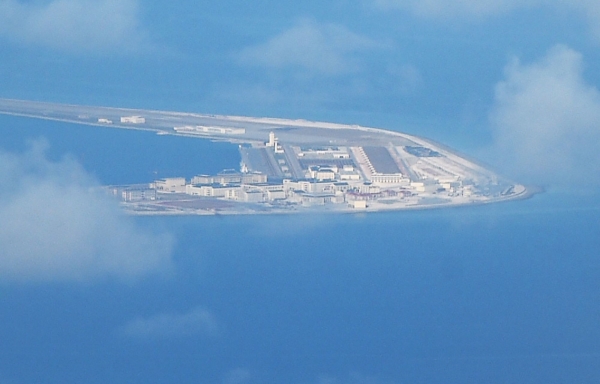 While the global focus has been on North Korea’s missile and nuclear programs, China has been quietly developing facilities from underground storage areas to hangers and radar arrays on reefs in the sea. The new real estate is on reclaimed land at Fiery Cross, Subi, and Mischief reefs in the Spratlys chain, and North, Tree, and Triton features in the Paracels.

"Beijing remains committed to advancing the next phase of its build-up—construction of the infrastructure necessary for fully-functioning air and naval bases on the larger outposts," the report said.

In recent years China has undertaken massive land reclamation in the waterway that hosts $5 trillion in trade a year to strengthen its claim to more than 80 percent of the area. That has strained ties with other claimant states such as Vietnam and the Philippines, as well as the U.S.

“Our forefathers used to meet in [the] Spratlys and get drunk,” Art Valdez, the head of a Philippine team planning to sail from Manila to Dezhou, China, in March 2018, told me. He was doing his best to shrug off worries that he and his team could be accosted by Chinese naval forces if they sailed too close to the Spratly Islands, a maritime feature in the South China Sea that is claimed by both Manila and Beijing.
This isn’t the first time that Valdez has tried to make this journey, or the first time that concerns about China’s assertiveness in the South China Sea have been raised. In 2010, Valdez and 30 others planned a similar journey—this one involving steering their three balangay, or traditional wooden boats, on a shortcut near the Spratlys. The Philippine embassy, Valdez says, stopped them from completing their trip due to fears that they would be blocked by the Chinese.

The embassy was probably right to call off the voyage. Major tensions between the two countries would soon erupt. In 2011, Chinese marine surveillance vessels shadowed the M/V Veritas Voyager—a ship contracted by the Filipino company Forum Energy to conduct oil and gas survey explorations in Reed Bank, east of the Spratlys. In 2012, heating tensions came to a full boil in a standoff near Scarborough Shoal, another area claimed by both China and the Philippines. The dispute sparked a landmark international legal case between the two countries, which was decided in the Philippines’ favor in July 2016.

Valdez, a former government official, knew all about the blocking of vessels, the stopping of fishing and other activities in the disputed maritime lane, and the fragile state of Chinese-Philippine relations. But for him and his team, the strife does not reflect the two nations’ happy past. And that is why, after an eight-year hiatus, the team will again set off for China in a couple of months.

The Filipino adventurers will ride the balangay to recreate the voyage of Sultan Paduka Batara (also called Paduka Pahala), a royal from Sulu, Mindanao, who sailed to China with a contingent of 343 people in 1417. Batara had been invited to visit Emperor Yongle by the Chinese explorer Zheng He, whom he had met in Mindanao. It was the only recorded trip made by a Filipino sultan to a Chinese emperor. Valdez decided to celebrate the 600th anniversary of the journey.

The wind seems to be blowing Valdez’s favor. For one, relations between the two countries are now far warmer than in 2011, thanks mostly to new Philippine President Rodrigo Duterte. Elected in 2016, he made a radical pivot to China, initially even threatening to end his country’s longtime military agreement with the United States. What apparently triggered Duterte was the Obama administration’s scathing criticism of his bloody war on drugs.

Duterte’s courtship of China was unsubtle. China was the first foreign country that he visited as president. He announced right before his departure in October 2016 that “only China can help us,” and then showed up bearing no less than the gift of realignment, as he announced the Philippines’ “separation” from the United States. The Filipino leader also brought trade prospects; 400 businessmen traveled with him, each ready to explore economic partnerships with China. Beijing and Manila inked 13 commercial deals worth $24 billion on that trip, with Beijing clinching major infrastructure projects, including the construction of railways in Duterte’s turf of Mindanao.

In Batara’s time, the nations were brought closer by the waters; trade sparked by the visit led to fleets of Chinese ships sailing to the Philippines. But these days, even with Duterte’s growing friendship with the Chinese leadership, it remains uncertain whether the two can be brought back together, especially since the tension over the South China Sea continues. The Philippine ambassador to China said on December 4 that Beijing has no plans to give up its claims over the Spratlys or withdraw its vessels from Scarborough Shoal, potentially blocking or restricting movement in this important maritime area.

For his part, Valdez insists that his team will not be affected by the ongoing squabble, because his journey is a cultural voyage. Their navigation, however, may be a unique test of Manila’s rekindled friendship with China.
Valdez’s balangay will traverse the South China Sea on its way to Dezhou, a city in Shandong Province. The choice of destination is significant. On his way back to Sulu in 1417, after meeting the emperor, Batara fell ill and died in Dezhou. The emperor had him interred there and built a mausoleum for him. That is why Valdez and his team picked the city. For them, it embodied Filipinos’ capacity to connect with other countries through maritime navigation.

After his death, Batara’s sons, Padula Wenhala and Paduka Andulu, stayed behind in Dezhou. Batara now has some 3,700 descendants living in China. In 2005, many of them traveled together to Sulu, where they met Paramount Sultan Ibrahim Bahjin Shakirullah II. In 2017, another generation went to Manila and visited the balangaycreated by Valdez.

Such journeys are welcome by Chinese diplomats, who present the friendship of Batara and Yongle as the prologue to today’s cooperation between Manila and Beijing. For example, Chinese ambassador Zhao Jianhua has said that the tale shows that China “pursues a neighborhood diplomacy that treats neighbors as friends and partners." Although Batara and Yongle’s friendship does indicate as much, ties between their countries have changed over the years, with China and the Philippines each accusing the other of territorial infringement in the South China Sea.

But Valdez would rather not think of the political implications of his voyage. “600 years ago, the sultan of Sulu went there in China and was honored,” he told me. “This has nothing to do with politics. It has something to do with culture and history. I leave the politics to the politicians. This is a people-to-people and cultural voyage.” In this, he seems sincere.

To that end, for their voyage in 2018, Valdez said that he will steer his team clear of the contentious parts of South China Sea, including the Scarborough Shoal, not because he thinks that they will be stopped by the Chinese, but because the shorter route—via La Union, a province in the northern part of the Philippines, to Xiamen, a port city in the Fujian province in China—doesn’t transverse any disputed territory.
Valdez is confident that, even if the team gets blown off course and faces the Chinese maritime police, he will not be stopped from completing his journey. The boats do not in any way resemble the gray or white vessels that usually ply South China Sea: gray hulls are destroyers, submarines, or navy military vessels and white ones are manned by civilians. The balangayis made of light brown wood, with sails bursting with bright red, yellow, and blue.

Valdez told me that each boat—measuring nearly 50 feet long and over 10 feet wide—costs millions, and he spent some of his own money to fund their construction. The wood used for the balangay is expensive and sourced mainly from the southern part of the country. And the labor costs are high: it takes a month to build each boat. He said that it’s worth it, since the ships show Filipinos and foreigners alike the culture of Filipinos’ ancestors, who used to trade with various parts of the world through sailing. They sailed as a community, so much so that the Filipinos’ present term for village, barangay, came from balangay.

When the Sultan of Sulu sailed to China, he had something else on his mind besides the disputed Spratlys and friendly ties: establishing stronger trade relations with the Chinese. The Chinese were known as skilled merchants even then, exchanging goods and commodities with other countries via their so-called maritime silk road.

Chinese merchants traded porcelain and silk for ginger, cloves, and batik fabrics with their Indian, Arab, and Southeast Asian counterparts, crossing Southeast Asia and going to the Indian Ocean. According to the book The Cambridge History of China, by Harvard's John Fairbank and Princeton's Denis Twitchett, the maritime trade “amount[ed] to several hundred thousand (liang) of silver annually.”

After Batara’s voyage, at the height of trade in the 1500s, Manila was at the center of regional trade, according to Jin Yuan, the Economic and Commercial Counselor of the Embassy of the People’s Republic of China. In an article for a local daily paper, The Philippine Star, he wrote that Chinese ships from Macau and the Yue Port, in Zhangzhou, would sail to the Philippine capital and then proceed as far as Mexico. Ellsworth Boyd, of the National Underwater and Marine Agency, has written that between three and five million silver pesos were shipped from Mexican mints to Manila yearly.

The old maritime silk road made the Philippines very prosperous indeed. Chinese President Xi Jinping’s introduction of a twenty-first century Maritime Silk Road may, thus, be a boon. The modern Maritime Silk Road is made up of the China-Indian Ocean-Africa-Mediterranean Sea trade route, traversing the South China Sea to the Indian Ocean, to connect China to Bangladesh, India, and Myanmar. It also covers the China-Oceania-South Pacific passage and could eventually extend all the way to the Arctic Ocean to link China with Europe.

According to Darlene Estrada, from the Center for International Relations and Strategic Studies of the Foreign Service Institute, the Maritime Silk Road will bear “more impact on the Philippines” as it involves the development of a port network linking the South China Sea to the rest of the world. Although it remains to be seen what economic benefit the Philippines will get from the new maritime silk road, Philippine finance secretary Carlos Dominguez recently noted that joining it will enable Manila to export its fruits to potential new markets, such as Kazakhstan and Uzbekistan, both of which are taking part in the scheme.

But even with the prospects of an economic boom, the introduction of the new Maritime Silk Road was met with caution, since China has used trade as a weapon to pressure other countries. At the height of the China-Philippines conflict in 2012, for example, China increased import requirements for bananas from the Philippines, which resulted in a $23 million loss for Filipino banana exporters and growers.

The route also highlights a frustrating truth: trading vessels can come and go freely in the South China Sea, but the fishermen from the Philippines, who traverse the very same waters, continue to be restricted in their movements. Even with today’s renewed friendship between the Philippines and China, Filipino fishermen are barred from the lagoon in Scarborough shoal, which is the area most teeming with marine stocks. And that is why, unlike the Sultan of Sulu’s voyage to meet Yongle, there is probably no one boat ride that can solve all the problems between the Philippines and China.