Of all the animals I can think of, cat is the only one I have a problem with eating for sentimental or emotional reasons. I spent the first 20 years of my life living with cats, all of whom lived long lives of up to or over 20 years.

All of my cats became – as any pet owner knows – a part of my family, and after their deaths they were missed and mourned as much as any family member would be. But, I disagree with the idea that cute animals or animals kept as domestic pets shouldn’t be eaten or are any more difficult to eat because of their relationship to humans. When it comes to cuteness, is there anything to rival a lamb? Yet most of us have no problem at all eating them. Of course, lambs are not domestic animals, but the point is that the emotional distance between watching a lamb skipping in the meadow and seeing, smelling, and tasting a lamb chop is vast and almost irreconcilable these days. In Vietnam, at least, my thinking goes like this: if the animal is eaten because it tastes good – as opposed to its supposed medicinal qualities – then I’ll eat it, and almost invariably it turns out to be good. So, I headed to Chấn Hưng Streetin Saigon’s Tân Bình District to try eating an animal that I’ve shared most of my life with. 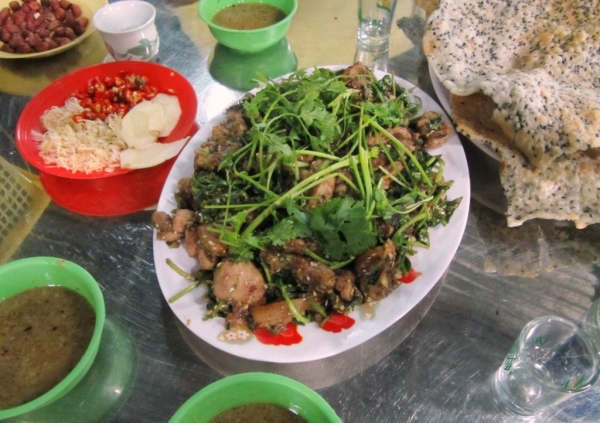 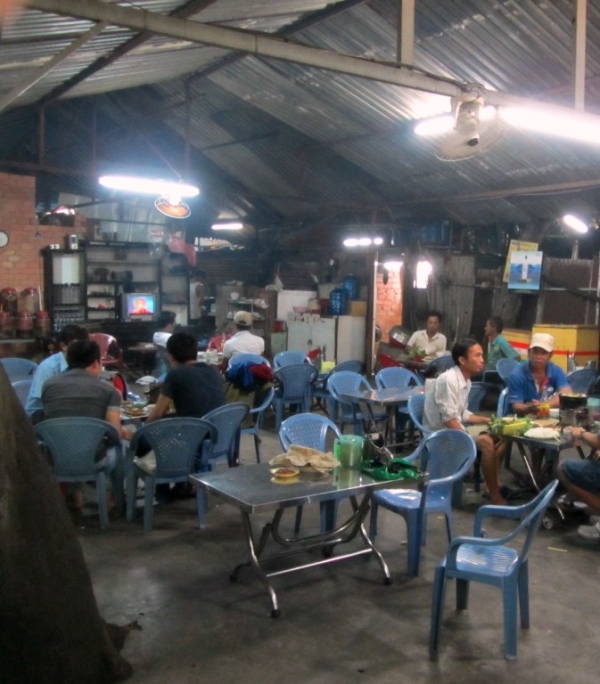 Vũ Thư Restaurant (123 Chấn Hưng Street, Tân Bình District) is a dilapidated shack thrown together with wooden planks, corrugated iron sheets and red bricks. Despite its ramshackle appearance this is the kind of place where you’ll find some of the best food in Vietnam. The restaurant is owned by Vũ and Thư, a friendly, hospitable husband and wife from northern Vietnam, who are proud of their menu, which includes both cat and dog. There’s a steady flow of customers throughout the night, many of whom are young Vietnamese in their twenties. Seating is on plastic chairs around low metallic tables. The sign outside advertises ‘fresh, live cats’, and as I scan the menu that’s printed on a tarpaulin hanging from the wall, I feel something brushing against my ankles; I look down to see three small cats fawning at my legs, eating morsels of discarded meat off the concrete floor. 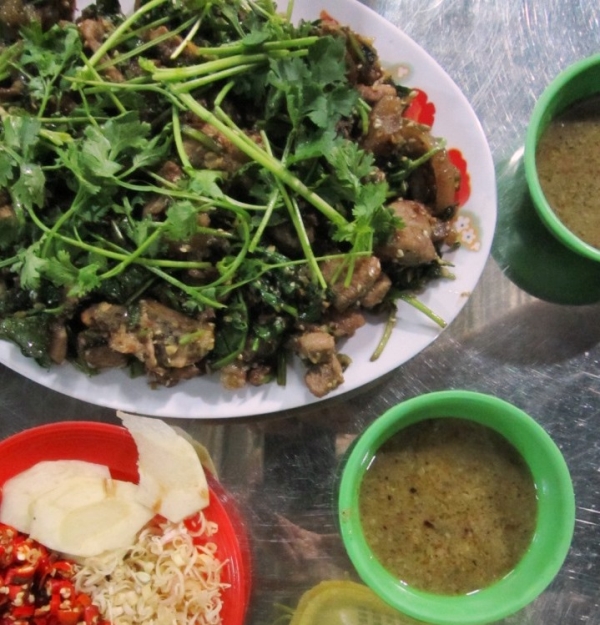 Of the couple dozen cat meat dishes on the menu I order three. The first thing to arrive on our table is a basket of green leaves, aromatic herbs, colourful condiments and crispy rice crackers; already we know we’re in for a good meal. The first dish is grilled chopped cat meat with rau má (a peppery clover-like leaf often called Vietnamese Pennywort) tossed in sesame seeds and garnished with coriander. We take some of the meat with our chopsticks, wrap it in a leaf, dip it in the peanut sauce, put it on a cracker, and eat. At first the meat is chewy, but then surprisingly light and soft. There’s a certain delicacy to it, almost like fish. It’s not particularly heavy, rich or strong like dog meat, and the addition of the herbs gives the meat a menthol, licorice quality that makes it taste clean and warming. We had to admit, it was delicious.

We watched for a few minutes while our next course was cooking over the large barbeque on the street-side. This gave us a chance to sample some of the dozen or so home-made wines that were displayed in big jars near the kitchen. An integral part of eating ‘exotic’ meats in Vietnam is the accompaniment of rượu – wine (probably better translated as ‘spirits’). We decided to try three different spirits to complement our three different cat dishes: rượu bắc (potent rice wine from the north), rượu mật ong (sweet honey wine with real bees in it!), and rượu bắc mật mèo đen(literally ‘northern black cat honey wine’). The latter was by far the strongest and none of us could work out what was in it, and we weren’t sure if we wanted to know either. 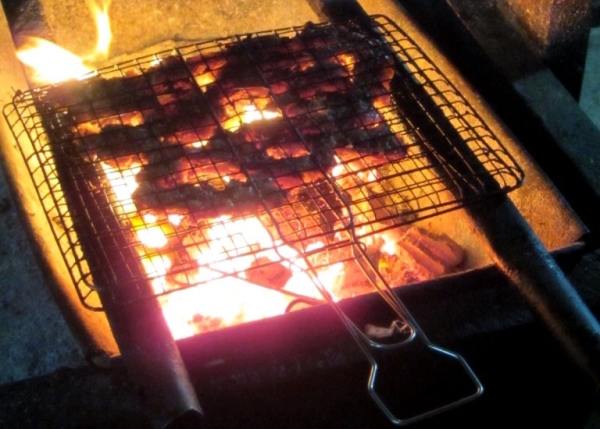 The flame-grilled cat ribs with a little lemongrass and a sprinkling of sesame seeds finally arrived. As we gnawed away at the bones we agreed once again that the meat was magic. The fat, however, was very peculiar and best avoided. It’s difficult to say why, but I suspect that the fat tastes strange because the flavour is so apparently unfamiliar that it’s disconcerting – although you know you’re eating something new and different, the moment you can’t link the taste with something more familiar, it scares your palate. 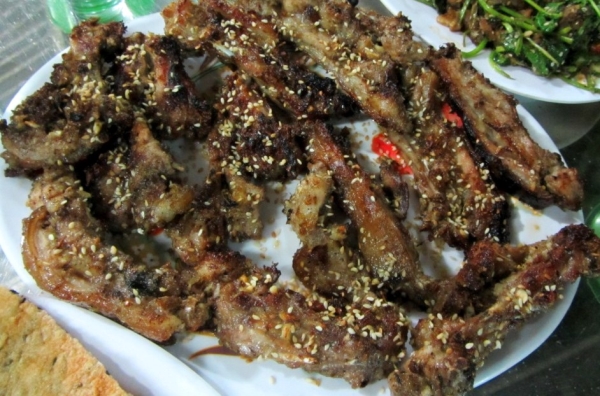 Our final dish was a mild cat curry with sweet and subtle flavours including lemongrass, coconut juice, basil leaves, and ginger. In many ways this was the star of the show; a good balance of ‘cool’ and ‘warming’ flavours that leave you with the fresh, clean feeling you get after having brushed your teeth. It’s worth noting that, even though cute-looking cats were walking amongst the tables and chairs the whole evening, I rarely thought of the link between those living animals and the meat on my plate. I’m sure I’d feel differently if I had to kill the cats myself, but surely most of us would feel that way about any of the animals we eat. In the West, at least, there’s a massive gap in the imagination between ‘animal’ and ‘meat’.