Vietnam’s football team secured the top place of Group D at the 2018 Asian Games (ASIAD) after beating Japan 1-0 in the third match in Indonesia on August 19. 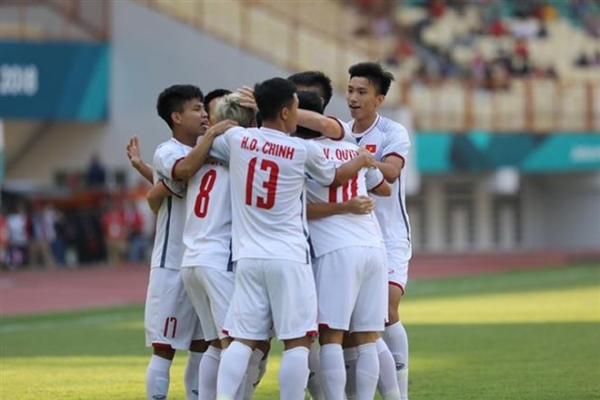 The last group stage match between Vietnam and Japan took place at the Wibawa Mukti Stadium in West Java, Indonesia.
A lapse in Japan's defense was seized by midfielder Nguyen Quang Hai to put Vietnam ahead right in the third minute.
A few minutes later, Hai, wearing number 19, had another shoot but it was saved by the Japanese goalkeeper.
Half an hour into the game, Vietnam has apparently launched more and stronger attacks. Its defenders were also all attentive.
Japan went into the second half with more attacks, having several shoots saved by the goal keeper during the first minutes. The game really went up a notch with strong attacks from both teams.
Vietnam sent Nguyen Cong Phuong, one of its main strikers, into the game in the 57th minute.
In the 77th minute, Nguyen Quang Hai left the game with injuries. He was replaced by Phan Van Duc.
Japan found the net in the 80th minute but it was scored from an offside position, and therefore, not allowed. The game was over after four extra stressful minutes.
Before the match with Japan, Vietnamese midfielder Nguyen Quang Hai said: “We are ready for the game with Japan. They are very strong but we as confident to play well.”
Meanwhile, coach Park Hang-seo said his team would try their best to beat Japan to top Group D.
Park said Vietnam completed their target of reaching the quarter-finals of the ASIAD, but are hungry to go further, starting with a win over Japan.
With the victory, Vietnam topped Group D with nine points and will play against one of the best teams who come third in Groups B, E or F on August 23.
Japan on the other hand will play against the team at the top post of group E, Malaysia.
Earlier, Vietnam beat Pakistan 3-0 and Nepal 2-0.