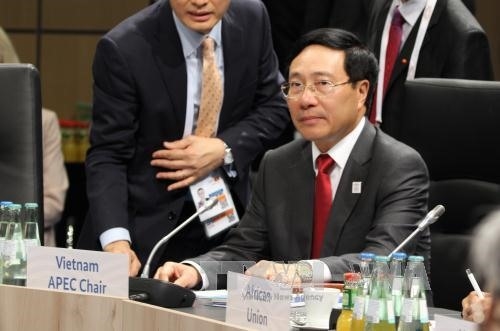 Deputy Prime Minister cum Foreign Minister of Vietnam, Pham Binh Minh attended the G20 Foreign Minister’s Meeting. Photo: VNA
On February 17th, Deputy Prime Minister cum Foreign Minister of Vietnam, Pham Binh Minh addressed the discussion session on “Maintaining peace in a complex world”, and attended a working lunch on “Cooperation with Africa” within the G20 Foreign Minister’s Meeting program.
In his statement “adhering to international law and promoting multilateralism for peace and sustainable development”, Deputy PM said the world is facing numerous challenges, in which the maintenance of the peace in a complex world itself is a big challenge, requiring international community to make joint efforts to tackle.
Deputy PM affirmed that international law is integral to a stable international environment; therefore, adherence to international law is a precondition to maintain sustainable peace. He called for peaceful settlements of disputes and conflicts among countries in compliance with international law and legal-diplomatic processes. At the same time, he claimed that conflict prevention is an effective way to maintain peace and stability, and asked other countries to promote preventive diplomatic measures, including trust building and early conflict prevention.
Emphasizing that a multilateral and comprehensive approach that benefits all parties is effective to sustain peace in a complex world, he called for deepening international affiliation and strengthening the role of international organizations, in which UN plays the core role in combating global challenges and sustaining peace and stability. He asked for more specific and constructive contributions from the G20 to maintaining peace and security in the world. He also requested G20 to take the lead in supporting developing countries to achieve their sustainable development goals through strengthening their capacity in addressing development challenges, especially in climate change, food security and water resource security.
Despite its modest capacity and resources, VN is striving to contribute to multilateral mechanisms, including its participation in UN’s peacekeeping missions in Sudan and Central Africa, he claimed.
Vietnam’s Deputy PM underscored that ASEAN played a central role in building security environment in Southeast Asia. “ASEAN Way” based on bloc’s solidarity and consensus has proved effective in tackling the challenges of regional peace and security, including territorial and sea-related disputes. He asked the G20 members to continue upholding ASEAN’s central role in the region.
Additionally, Deputy PM Minh underscored the role of Vietnam as the APEC 2017 host country, showing its determination to promote and connect the agenda of APEC and G20, especially in areas of common interests such as sustainable, creative and inclusive growth, cooperation in combating climate change; food security and sustainable agriculture, etc. to foster regional and global cooperation to address economic and global governance issues in the new context.
At the working lunch on “Cooperation with Africa”, all parties strongly agreed that the support to maintain peace, stability and development in African countries will significantly contribute to fostering a world of peace, stability and development. The G20 members affirmed their commitments to support African countries in promoting industrialization, education training, social security, environment protection etc..